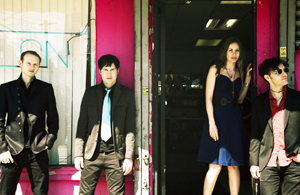 Stellastarr* revisit their roots on their new release, Civilized. On this, their third effort, the ensemble reunites with producer Tim O’Heir, who contributed to the band’s eponymous debut, to create an album that harkens back to those earlier days yet also manages to propel Stellastarr* into fresh territory.

“This album mirror-images the first one in that we actually recorded it a year ago, and for whatever reason, we stalled on releasing it. Then we recorded a couple new songs a couple months ago and decided that was our final record,” vocalist and guitarist Shawn Christensen shares on a conference call from the band’s base in New York. “The same exact thing happened on the first album where we recorded the whole the record, and then a year later we recorded ‘In the Walls’ and then released it.”

On Civilized, songs aurally similar to their sophomore release, Harmonies for the Haunted, like “Warchild” and “Sonja Cries” are found neatly nestled alongside upbeat tracks like “People” and the album’s first single, “Graffiti Eyes,” a punchy track unlike anything the band has released before.

“There’s songs for all of our fans on the record as far as different moods, and it’s kind of what we did on the first record. There was ‘Moongirl’ and ‘Untitled,’ but then there was also ‘Jenny’ and ‘Somewhere Across Forever.’ So I think that’s basically what we did again,” Christensen says.

Bass player and vocalist Amanda Tannen expands on ways that Civilized departs from their prior release. For one thing, she explains, the members returned to work on their various work and artistic endeavors, rather than jumping directly into pressured song writing sessions. The song writing process that emerged was more relaxed and natural.

“We didn’t have one set vibe for the record. We just wrote when we felt like writing, and whatever songs came out when we felt like it came out at that point,” she says. “It just morphed as we were going instead of having a set idea of what we were gonna do. We went where it brought us.”

Civilized also finds the band exploring new sounds, in particular, Christensen’s vocal delivery. He frequently diverges from his usual foreboding tenor warble, experimenting with new techniques and bringing a greater diversity to the album. But the change was made more out of necessity than out of a desire for variation.

“It would be really tough to sing certain registers after a long period of time. I realized that singing in the lower register was putting a strain on my voice, so on this album I didn’t use that register too often. I used it on ‘Warchild’ and maybe ‘Sonja Cries,’ but beyond that I decided just to stick with notes that were a little bit higher and sing a little bit differently,” he explains.

A greater opportunity for fan involvement in the process of creation with social networking sites like MySpace and Twitter created a more interactive experience as well. Utilizing these tools, the band was able to share the album’s progression and development, such as with the song “People.”

“We changed the entire chorus of that song and made it into a whole new thing, and it’s one of my favorite tracks on the record now. We had released a version for people to listen to with the old chorus, so I think that’s sort of become an interesting track [for the fans],” says Christensen.

After a two-record fling with RCA, Stellastarr* has taken back the reigns, returning to a DIY approach (In the band’s formative years they self-released several EPs.). Their latest effort will be released on their own Bloated Wife Records.

“We loved RCA, but when they merged with Sony we felt like we just kind of got swallowed by a larger machine that just wouldn’t give us what we needed and wanted as a group, and we decided that the best thing to do was to leave,” Tannen says.

Instead of relying on major label backing, the group forged on independently, maintaining artistic control every step of the way straight through to the mastering of the recordings and later, the album’s distribution.

Civilized is currently available. Stellastarr* will perform July 31 at the Troubadour. For more information, visit stellastarr.com.