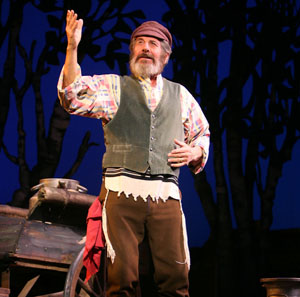 Topol in “Fiddler on the Roof”
(Credit: Joan Marcus)

“Fiddler on the Roof,” the story of Tevye, a humble milkman and the father of five strong-willed daughters, stars Chaim Topol (known – like Cher or Madonna – simply by the name Topol) in his farewell tour of a role that earned him a Golden Globe Award and an Oscar nomination in the 1972 film.

Beautifully staged to look like a dilapidated storybook, from the moment the curtain rises, Topol’s voice booms through the theater like a baritone saxophone. Captivating, emotionally charged and brilliantly acted, Topol has performed the role over 2,500 times since his first turn on the West End in 1967.

Proving the old saying, “Practice makes perfect,” the 73-year-old is flawless in a gem of theater about antiquated traditions, bonds of family and the horrors of prejudice.