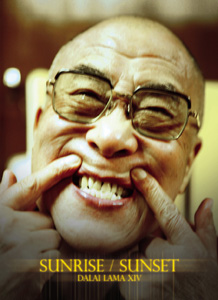 Peek into the like of the Dalai Lama in Sunrise/Sunset.

Great documentaries can win awards at Cannes and Sundance, but an Academy Award is a little trickier. In order to qualify for consideration for an Oscar, a film must have had a public theatrical run – a luxury for most low-budget documentaries. But the International Documentary Association is determined not to let the best new documentaries slip through the cracks, and for the last 12 years has presented DocuWeek, putting their cache of true films into week-long theatrical runs that qualifies them for Oscar nods.

This year, due to the overwhelming number of entries, IDA’s DocuWeek is now DocuWeeks and over the next 21 days, ArcLight Cinemas will screen 18 eclectic documentaries and two programs of shorts from eight countries.

Each week has its own set of movies, each running once a day until the next set kicks in. Week one, for example has five feature-length documentaries including Sunrise/Sunset: Dalai Lama XIV, which tracks a day in the life of His Holiness; Dirt! The Movie, a look at the history of nature’s most plentiful resource and Smile ’Til It Hurts: The Up With People Story, which talks to former members of Richard Nixon’s favorite singing group (who exemplified American values in the face of ’60s counterculture).

Week two is equally as diverse with a rock photographer’s new muse, North Korean expats, the music of the Civil Rights Movement, government drilling on private land, the history of bottled water and a movie comprised entirely of footage from a combat marine’s Sony Handycam. Week three finds a documentary about Wavy Gravy (Google him!), a 27-year-old man that lost his memory and tween go-kart racers who dream of racing in the Indy 500.

DocuWeeks is a great opportunity for both documentary fans and filmmakers. Created in 1997, it has qualified 165 films for the Academy Awards, yielding 15 nominations and six Oscars. And with showtimes ranging from matinee to late night, there’s no excuse to not see some of next year’s hopefuls.