Another Pirates, Seth Rogen at the Comic-Con 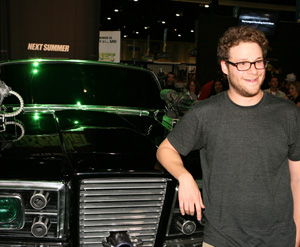 Seth Rogen at the Comic-Con unveiling of the Black Beauty from The Green Hornet
(Credit: Matt Young/SPE, Inc.)

Potential Plans for a Fourth Pirates

Last weekend in San Diego, the annual extravaganza known as Comic-Con was in full swing. Comic-Con, for those who don’t know, is a big comic book convention held every year in San Diego. It began as an event strictly for comic books but later evolved into a multi-genre fan convention where all the upcoming movies, television shows, comics, animation, video games, etc. are unveiled and discussed on panels by the artists and filmmakers.

I did not attend this year’s Comic-Con, but most of the movie stuff that goes on there appears in the trades for people to keep up with. While there is a lot of stuff pouring out of there that I could care less about, I thought I’d talk about a few things that caught my attention.

Disney’s head of production Oren Aviv was there being interviewed and said something interesting about the planned fourth entry into the Pirates of the Caribbean films that the studio is aiming to shoot next year. Aviv is quoted as saying: “It’s important to get the story right, and it’s important to me to scale it down, because we can’t get bigger. The movies have subsequently gotten bigger and very complicated, and they were satisfying on so many levels obviously, but I want to kind of reboot the whole thing and bring it down to its core, its essence, just characters.”

I’m a big fan of the Pirates films. The sequels improved on the original, and while not the best, the third entry into the series, At World’s End, is way stronger than most third entries are.

Normally the theory in Hollywood about sequels is a proper follow-up to a popular action film is “bigger,” “louder” and has more “mayhem.” Such was the case with Dead Man’s Chest and At World’s End, but it sounds like Aviv understands that isn’t true for all sequels, especially when you’ve done it already.

I think that the fourth Pirates film should see Captain Jack evolving as a character. One idea I had for a cool direction for the next film would be to see Jack Sparrow end up like Bernie Madoff. What if Sparrow gave up being a pirate and the sea, and tried being a high-rolling businessman? What if he became a whole new Jack whom his close friends didn’t recognize? What if he gambled with a lot of other people’s money and had to revert back to his pirating ways to get himself out of the mess he’d made? Just a thought. Hopefully Disney will stick with this possibility of doing a more intimate Pirates movie and won’t try to “jump the shark.”

The Green Hornet Unveils His Car

The upcoming adaptation of The Green Hornet’s star Seth Rogen, co-writer Evan Goldberg (Superbad) and director Michel Gondry (Eternal Sunshine of the Spotless Mind, The Science of Sleep) were on hand at Comic-Con to unveil the car from the film. The pics of the car named the Black Beauty were really cool, and it got me a little more excited to see the film.

While I’m not completely sold on Rogen as a serious action star, that’s also the reason I’m looking forward to this. I love when casting takes a left turn and leaves you exercising your skeptic muscle.

But the biggest reason I’m looking forward to this film is the involvement of Gondry. There’s no question that he, along with Spike Jonze, is among some of the most visually brilliant directors working today. These are the guys to start giving the big, high-concept movies to.

There are tons of generic directors out there who basically emulate and copy the styles of some of the great directors who have come before them, but there are few who have visual styles that are all their own. When I saw the pictures of the car, it looked like something I wanted to see other than something lame and generic.

If you’re one of those people who hasn’t seen a lot of films and all the new garbage coming out seems new to you, you’ve got no say in the matter. But if you’ve seen a lot of films like me and are well versed in what’s been done, it’s nice to enjoy the work of a director like Michel Gondry.