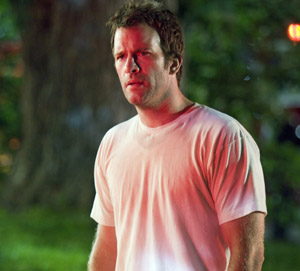 To say Ray is down on his luck would be a complete understatement. His wife, Jessica (Anne Heche), left him for a successful doctor. His house catches fire, forcing his teenage son and daughter, Damon (Charlie Saxton) and Darby (Sianoa Smit-McPhee), to move in with Jessica and her new hubby, Ronnie (Eddie Jemison).

The basketball team Ray coaches is having its worst losing streak in years, so he’s forced to seek other ways of making money. He enrolls in a self-help course where he runs into a former one-night stand, Tanya (Jane Adams). When the seminar coach assigns homework, determining a talent you can build a business plan around, Ray realizes his only real talent is his skill in the bedroom.

After Tanya gets angry when they fall into bed again and Ray tries to sneak off immediately thereafter, she screams at him, “You want to be a millionaire? Why don’t you go market your dick!” A light bulb goes off in Ray’s head, and here’s when the fun starts. Or at least it should be.

Created by Dmitry Lipkin (creator/writer of “The Riches”) and Colette Burson, and with a pilot directed by Alexander Payne (Sideways, Election), I had high expectations for the series. While I’m not disappointed with the acting – the cast is impeccable – the story development is just too slow. But with the promising addition of hilarious Alanna Ubach as Ray’s feisty neighbor, “Hung” still has lots of potential.