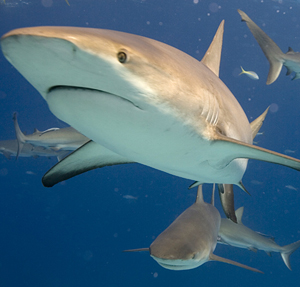 Caribbean Reef Sharks in waters off the Bahamas
(Credit: discovery.com)

It’s hardly ever discussed, but everyone wonders about sharks when they’re at the beach. It might be when they’re surfing and they think they see the outline of a seal or a Great White swimming below, or maybe they’re secretly struck with so much fear that the mere thought of sticking even a pinky toe in the salty waters engenders an “addiction” to tanning.

Yes, the danger is real. It is quite rare to get attacked by a shark, but we are in their territory.

Yet there is something fascinating about these potential “man-eaters.” Their magnificent power is something humans marvel at, though we cannot fully comprehend it. To satisfy our curiosity, Shark Week is back on Discovery Channel.

This week of water terror premieres Sunday, Aug. 2 with “Blood in Water,” the true story behind the hit thriller Jaws. “Deadly Waters,” a program where shark attack survivor Lee Stroud performs a series of experiments to determine the deadliest waters, follows on Monday, Aug. 3 at 9 p.m. Next, “Day of the Shark II” depicts shark encounters on Monday, Aug. 3, at 10 p.m.

On Tuesday, Aug.4 at 9 p.m., “Sharkbite Summer” recounts the proclaimed “summer of the shark” in 2001, when sharks were supposedly reclaiming U.S. shores. “Great White Appetite,” which premieres on Wednesday, Aug. 5 at 9 p.m., features feeding experiments at three of the main Great White feeding grounds. Shark Week concludes on Thursday, Aug. 6, at 9 p.m. with “Shark After Dark,” an investigation of the aggressiveness of the aquatic predators at their nighttime hunting grounds.

Intrigued? Thought so. Tune in to Shark Week and discover the mysteries of the ocean’s deadliest predators.