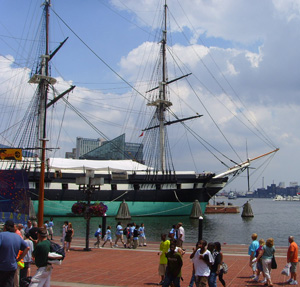 Never before has the city witnessed anything like this! Usually populated only by happy people and the occasional seabird, Baltimore’s bustling Inner Harbor area has been overrun by beasts from the east! The scene looks like something out of a sci-fi movie but the cold hard facts are undeniable –Chinasaurs are in charge of Baltimore’s waterfront!

And while the hulks were busy taking over the Maryland Science Center, no one even noticed their allies, the jellyfish, storming the National Aquarium. Oh, it’s going to be a long summer in Baltimore!

Of course, the Chinasaurs and jellyfish mean Baltimore no harm. In fact, they’re on hand just to add to all the fun to be had in the city’s Inner Harbor district. The city’s waterfront playground is already packed with attractions on and adjacent to the water, but no matter where you roam in the area, you’ll see dinosaur “footprints” and images of jellyfish reminding you to come say hello to them.

When you enter the Chinasaur: Dinosaur Dynasty exhibit at the Maryland Science Center you’re greeted by a giant animatronics dinosaur that swings his elongated neck as he grunts and blinks his eyes. The electric dino is actually more cute than he is scary, but just wait until you walk around the corner!

The display is the largest touring exhibit of authentic Chinese dinosaur fossils, and towering over everything is a sculpture of a 70-foot long Mamenchisaurus that has a neck so lengthy it makes giraffes look puny. The exhibit is a mixture of authentic fossils, casts and sculptures made from authentic fossils and lifelike animatronics dinosaurs “fleshed out” by referencing fossils. Surprisingly some of the Chinasaurs were no bigger than a house pet, and their tiny skeletons make you wonder what it might have been like to have had them running around the back yard. The exhibit also offers museum-goers a hands-on experience with dinosaur eggs, skins and skulls.

Over at the National Aquarium the jellyfish display is, of course, quite the opposite. You wouldn’t want to touch these guys! These prehistoric creatures are boneless, but most of them have stingers so it’s really the best thing to meet them when they’re in a tank.

The Jellies Invasion: Oceans Out of Balance exhibit explains why jellies are thriving to this day and displays tank after tank of the mesmerizing creatures. The exhibits are perfectly lit and made so that you can get right up to them and marvel at how the jellies seem to change color and “jet propel” themselves through the water. Pacific sea nettles, Moon jellies and Blue Blubber jellies are just a few of the species on display.

A good way to get an idea of all there is to do in Baltimore’s Inner Harbor area is to take an hour-long tour aboard an amphibious vehicle with Ride the Ducks (baltimoreducks.com). These tours are conducted aboard specially-built coaches that can also ply the waterways, so after a trip through the downtown area the Duck drives right into the harbor and sails by attractions like the USS Constellation, the last Civil War-era vessel still afloat. You’ll sail by the USS Torsk SS-423 submarine too and the overall view of the harbor from the Duck is spectacular.

There are dozens of attractions in the Inner Harbor to keep you going during the day, and at night the place to be is at Power Plant Live (powerplantlive.com). There are lots of places to eat and drink at Power Plant Live, but after 10 p.m. the music cranks up at Angel’s Rock Bar and several other clubs.

The Inner Harbor is exciting all year-round, but the Chinasaurs and jellies exhibits are temporary; catch them before Labor Day.