Galaxy Earn Draw on the Road 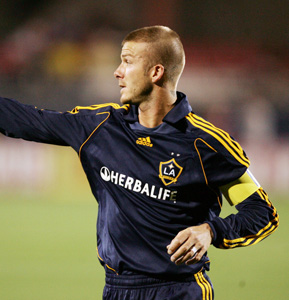 The Galaxy’s biggest stars helped the squad earn a 1-1 road draw against the Wizards in Kansas City.

English midfielder David Beckham connected on a pass to American striker Landon Donovan to net the team’s lone goal in the 33rd minute. The score arrived seven minutes after Argentine forward Claudio Lopez collected a goal to give the Wizards a 1-0 edge.

Nevertheless, Beckham assisted on Donovan’s game-tying goal, which is his team-leading eighth for the season. Beckham recorded his first assist on the campaign since returning from AC Milan.

With the win, the Galaxy move to 6-3-10 with a total of 28 points. They are currently in third place in the Western Conference.

Los Angeles returns to the pitch Saturday, as they compete in an international-club friendly versus FC Barcelona at the Rose Bowl. Kick-off is at 8 p.m.