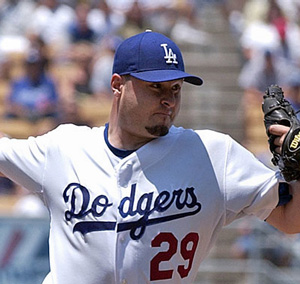 When longtime Giants ace Jason Schmidt signed with the Dodgers before the 2007 season, many Dodger fans felt something was wrong about the whole deal. Nobody could question the man’s pitching abilities; he had been one of the best in the game, leading the league in earned run average on multiple occasions and helping take the Giants to the postseason more than once.

With his signature stone-cold expression and a dark goatee, Schmidt had been the face of the Giants’ pitching staff and one who terrorized Dodger hitters whenever they faced him in San Francisco. With a record of 1-6 against Schmidt, the Dodgers all but withered before him when visiting the Bay. Giants’ fans adored him.

Yet it wasn’t only the Dodgers. During his time in San Francisco he posted a record of 41-16 at AT&T Park. For these and other reasons, it was hard to get adjusted to the idea of Schmidt wearing a Dodger uniform.

Then came the shoulder injury. After just six starts in 2007 in which Schmidt posted a record of 1-4 and an ERA of 6.31, he was placed on the disabled list to undergo a surgery that would put him out of commission for more than two years.

It would have been easy to forget about him, except for the minor detail that the Dodgers were paying him $47 million for three years. To his credit, Schmidt has worked his way back to the major leagues after a rehabilitation stint in the minors.

Alas, his return has not met the finest hopes of either Schmidt or the organization. After a rocky first outing, in which he nevertheless earned a victory, Schmidt himself was rocked for five runs in just three innings Sunday, July 26, against the Marlins, a game the Dodgers would go on to lose.

The defeat was poignant, for it seemed to squash the hopes of Schmidt being the missing link to a shaky pitching staff.