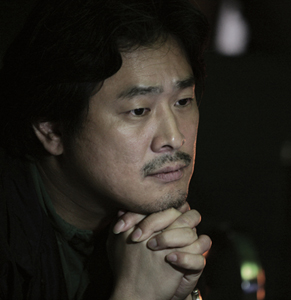 Director Park Chan-wook on the set of Thirst
(Credit: Courtesy of Focus Features)

Thirst is the latest film from Park Chan-wook, the acclaimed director of Oldboy and I’m a Cyborg, But That’s OK. This highly anticipated movie is already a big hit in Korea, and it was an official selection at the 62nd Cannes Film Festival, where it was awarded the Jury Prize.

The film stars Korean favorite Song Kang-ho as a goodly priest who finds himself the victim of a horrible disease with side effects including an extreme aversion to sunlight and the need to drink blood in order to survive. This affliction soon puts the priest on very intimate terms with all of the Seven Deadly Sins … especially when he begins to lust after the wife of a childhood friend.

Fans of Park Chan-wook’s Vengeance Trilogy (Sympathy for Mr. Vengeance, Oldboy, Sympathy for Lady Vengeance) will not be disappointed. Thirst is a fine display of the beauty, violence and black humor that permeates Chan-wook’s best work.

Recently, the director took a moment to speak about his latest film and how he balanced the humor and seriousness:

“Ten years ago I couldn’t dream I’d end with a film like this, because at the time I was determined to make a humorless film. I told myself I wanted to make the darkest, most serious film in the history of cinema,” says Park.

The film didn’t turn out that way, and Park offers up this explanation: “A filmmaker’s tendencies or his personality isn’t something that can be changed by determination, because even though I decided to make this very serious film, I ended up with something like this.”

“With a character in a film,” he elaborates, “the more they struggle or the more they jump around full of rage, or whether they become subject to violence or they tremble in fear in anticipation of such violence – or when they are gripped with an extreme sorrow – in these situations, if you just shift the angle a little bit, if you change the point of view or if you change the size of a zoom, then you are able to capture humor in that situation.”

Park’s sensibilities lend themselves easily to a genre film like Thirst, which he sees as a natural progression of his fantastical narratives.

“By decreasing the amount of supernaturalism contained in this film, I think I was able to meet a middle ground. I brought down the level of supernaturalism to meet the level of surrealism found in my previous films. If you think back, ever since JSA [Joint Security Area], fantastical elements in my films have been on the increase. Look at Sympathy For Mr. Vengeance, Oldboy, Sympathy For Lady Vengeance through to I’m A Cyborg, But That’s OK. So, with this increasing of fantastic elements in one hand, you could almost say that this is a part of that progression, to reach Thirst.”

So, what piqued his interest in vampires?

“If you ask me what elements of vampirism I find interesting, unlike other films, it’s not the vampires being immortal or having superpowers or their being very beautiful, but it’s the fact that they can only consume blood and they can only move about during the night. This is a being that is very limited in what they can do. It is almost someone to be sympathized with, these poor creatures with all these limitations placed on them, these limitations that they did not seek.”

Thirst paints an intriguing portrait of sinful lust and sensual pleasure, an intelligent treat for discerning fans of world cinema.