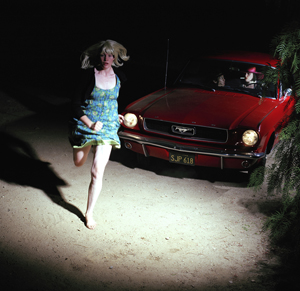 In 10 years, Jessie Gentry would like to be a skilled photographer and filmmaker with her own production company. Currently, the 24-year-old photography major at Art Center College of Design is working hard to achieve those dreams.

Her present project, a series on L.A. women murdered by their husbands, has attracted media interest, indicating she is moving in the right direction. Gentry attributes her recent success to her ability to stay close to the issues that are important to her and not be deterred by the obstacles she faces along the way.

Her murder series, for example, explores Gentry’s deep-seated beliefs in women’s rights and anti-violence against women. Following her interests, the chosen subjects’ murders were barely covered by the media when they occurred. Gentry photographs the locations of these crimes.

Despite knowing the project would be time-consuming, Gentry spent laborious months patiently trying to piece together the whereabouts of the murders from the various news articles she found.

One of the murders took place as the sun rose on the scene, which gave her only a 10- to 15-minute window to shoot. As complications ensued, her team had to come back another day for a re-shoot. Eventually, her perseverance paid off and she successfully created photographic narratives showcasing the underbelly of human experiences.

The project also integrated her penchant for playing with lights and drama. The results were Gentry’s distinctly mysterious and romanticized versions of horror photography.

As she transitions from photography to film, Gentry plans to incorporate her dramatic flair with cinematography to create a signature filmmaking style. Inspired by Alfred Hitchcock, she wants to create experimental films and recreate film noir in contemporary ways.

As an artist, Gentry stresses the importance of being unique and finding one’s own style and niche. She notes that it is common to find art students’ works to be similar to the current vogue. Due to the competitive nature of her major, coupled with students’ desires to please their audience and establish their names in the industry, it is no wonder this has long been a ubiquitous problem.

“It is alright to be inspired by other people’s works, but you should not copy what the popular photographers or filmmakers are doing, or follow the trend because everyone is doing it,” she says.

“In the end, art is not about money, it is not about being rich and famous,” she adds. “I just want to create more films and photography and be happy.”