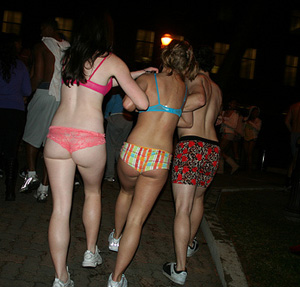 Citing safety concerns, UCLA administrators told student leaders that the university will no longer allow the three-times-a-year Undie Run, an unofficial campus tradition. Initiated in 2002 as a way of relieving stress during finals week, the Undie Run involves students running through campus, many in their underwear, in the middle of the night. The event regularly attracts 8,000 to 10,000 participants.

On the Town screens at UCLA.

The 1949 classic, On the Town, starring Gene Kelly and Frank Sinatra, is playing Aug. 9 at 7 p.m. at the Billy Wilder Theater – Hammer Museum. The musical chronicles three sailors on a 24-hour leave in Manhattan and all the trouble they can and will get into, especially when each finds a gal, and song and dance take over. Tickets are $10 in advance online.

A parking lot at the corner of Weyburn Avenue and Weyburn Alley is the new site for 504 studio graduate student apartments, adding to the already existing Weyburn Terrace complex. The building’s design has not been finalized, but the UC Board of Regents has approved a plan to raise $121 million for the construction, with no state funds used in the project.