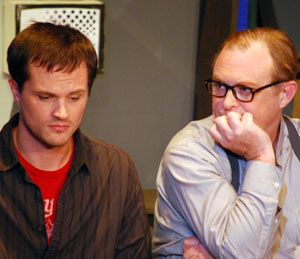 “Carved in Stone” tells the story of a young writer, Gryphon Tott, who dies in a subway accident and finds himself taken by a celestial elevator to a community of late, gay, literary lions dwelling in an afterlife lounge. When the residents explain that the elevator designates alike individuals to the same room, Tott encounters a puzzling situation: He has mistakenly been commemorated as a gay author and icon despite his heterosexual orientation.

Tott and his newfound friends – Truman Capote, Oscar Wilde, Tennessee Williams and Quentin Crisp – consequently attempt to resolve the contradiction. The ensuing revelation leads them to discover the fine line between artistic originality and plagiarism, and the occasional conflict between reality and perception.

Written by the late gay playwright Jeffrey Hartgraves, the audience is not only invited to ponder intellectual issues, they are also entertained by the play’s comedic delivery. Besides the ample amount of belly laughs from the bitchy bantering and the exchanging of literary wits, the stage is also enlivened by the transitory visits from Judy Garland, Bette Davis and Shakespeare.

Cleverly directed and briskly paced, the play leaves the audience with food for thought besides giving them a delightful evening.