The Great Buck Howard, and Much More 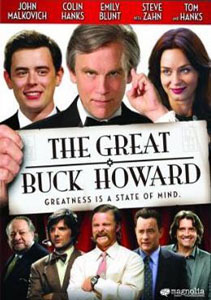 From Criterion, With Love

One of Roman Polanski’s greatest films, Repulsion comes to Criterion DVD. Catherine Deneuve stars as a young woman who descends into madness over the course of the film. Polanski, a master of disquiet, essentially rapes Deneuve with bravura cinematic techniques, putting her and the audience through the emotional wringer. Extras include a commentary track by Polanski and Deneuve.

Colin Hanks and John Malkovich star in the markedly sincere The Great Buck Howard. Hanks plays a young law school dropout who takes a job as road manager to a forgotten mentalist who still clings to his days as a “Tonight Show” guest.

Sure the American remake is pretty good, but the original BBC version of “Life on Mars” blows it out of the water. A present day detective involved in a car accident wakes up to find himself in 1973. Is he delusional or a time traveler? Now he’s torn between solving crimes, getting back home and staying with the woman he’s fallen for. It’s a refreshingly innovative take on a well-worn genre. Series 1 is now available.

Nobody does police procedurals like British television. “Wire in the Blood” follows a brilliant but absentminded clinical psychologist as he works alongside the police in profiling serial killers. It combines “Cracker” with the books of Thomas Harris for a topnotch drama with disturbing glimpses into the minds of sociopaths. The Complete Sixth Season is now available.

Don’t be scared off by the ABC Family label, “The Middleman” is a fun, hip adaptation of the graphic novels. Middlemen are top secret agents brought in to clean up those “exotic problems,” from evil Lucha Libre wrestlers to cheesy monsters. Matt Keeslar of Waiting For Guffman is great as a wholesome Cary Elwes-esque hero. The short-lived complete series is now available.

“Battlestar Galactica” ends its stellar run with a finale that doesn’t disappoint in Season 4.5. The set contains 15 hours of extras, including extended un-aired versions of episodes and commentary tracks.

“Gungrave” is an action-packed, visually stunning anime series about an undead gangster and his quest for revenge on the mafia friend who betrayed him. The Complete Series Box Set is now available.

Dog Days collects legendary animator Bill Plympton’s work from 2004to 2008, including his Oscar-nominated Dog Trilogy, about a spirited, but slightly demented, little mutt. Also included are some of Plympton’s lesser-seen shorts and loads of behind-the-scenes extras.

Many a college term paper has been put off with the help of the folks at HomestarRunner.com and what has become their most popular feature, Strong Bad Emails (Vol. 6 and Greatest Hits DVDs are now available). The wrestling mask-wearing misanthrope’s riffs on viewer e-mails are completely addictive. Episodes such as “Trogdor the Burninator” have become pop culture staples.

Former member of Monty Python and history buff Terry Jones marries his two interests in The Terry Jones Collection. Jones’ unique approach to finding the stories of everyday life behind the typical focus on the Great Pyramids and emperors is refreshing, almost revisionist. It’s a fascinating collection, exploring life in ancient Egypt, the Roman Empire and the history of sex and war.

Also available: Big Blue, Ripped Off: Madoff and the Scamming of America, The Union: The Business Behind Getting High