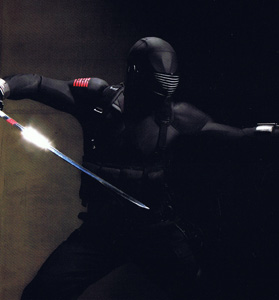 A master of wushu and sword work, Ray Park initially made a career playing the faceless and voiceless, but with his role as Snake Eyes in G.I. Joe, everyone will know his name. After an auspicious start in Mortal Kombat: Annihilation and as the headless horseman in Sleepy Hollow, Ray Park burst to the fore of the cinematic combat world with his role as Darth Maul in Star Wars: Episode I - The Phantom Menace.

A student of martial arts, especially kung fu, from the age of seven, it was Park’s father who sparked his early interest in the craft with movies starring Bruce Lee and Jackie Chan.

“My parents were very young when they had me,” he recalls, “so when I came into the world I basically was my dad’s shadow.”

Growing up together in many ways, Park and his father shared a love of sci-fi, comic books and kung fu movies. Soon after moving from Scotland to London, his father enrolled him in a local dojo.

By the time he was in his early teens, Park’s focus was on getting into film so he could work with his idols like Chan and Jet Li. It was that obsession which led him to wushu, a style he describes as “an extension of kung fu, just more dynamic and flamboyant. Some people say it doesn’t look like kung fu; it’s more like ballet, a more gymnastic form. One of my seniors in kung fu class said, ‘You have to learn wushu because Jackie Chan only works with guys who do wushu.’”

Though he has yet to work with Chan, an honor he says he still hopes for dearly, that was all he needed to charge down a path that led him to Hollywood in 1997 and made him a deity to fanboys everywhere in 1999 with the release of The Phantom Menace, a legacy that grew with X-Men and could reach its nadir with G.I. Joe.

Like most little boys, Park was a huge fan of cartoons and comic/action figures.

While he says he felt he was “born to play Snake Eyes,” the role came with more than a hefty training and fight choreography schedule.

“It was hard working with the suit and the visor,” Park relays gallantly, obviously not wanting to seem like he’s complaining, but still slightly traumatized. “I didn’t know I’d be wearing anything like that. I really did have to become a ninja because my senses were obscured. It was a challenge for me.”

What was less challenging was the immediate camaraderie on set. Park has only the highest praise for his co-stars, especially Channing Tatum in the lead role of Duke.

“Channing is so physically talented it’s unbelievable,” Park gushes. “That guy just picks up anything and he’s a natural. I was really impressed. When we finally got to set, Channing, myself and the other stunt guys were doing flips and break dancing. It was like being back at school and training again.”

When asked if he has any pet peeves when it comes to fight sequences or trends in recent action movies, Park admits, “I’m a bit old-fashioned. I like to see the action. I’m not a big fan of cuts, fast edits and making it look messy. If you’re going to make someone work hard, practice and rehearse, then at least give them the credit of showing it off.”

Having taken part in the resurrection of one of the ’80s most beloved cartoons, before our interview was over, I had to ask one last, supremely important question: Is it true? Is knowing half the battle?

But he didn’t give an answer.

G.I. Joe: The Rise of Cobra releases in theaters Aug. 7.