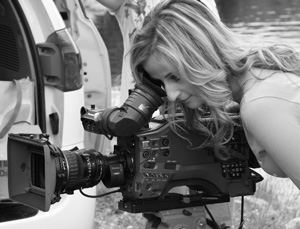 With the mounting concern over the county’s water shortage (and Los Angeles’ existing tap water stigma), many Angelenos are turning – or already have turned – to bottled water to help assuage their water woes. Considering the convenience of being able to bring a pre-packed bottle of water that you can throw in your car or in your bag and take to class with you, what’s not to love about water bottles? Right?

With fresh, clean, drinkable water coming out of your sink at home, you may not realize it, but there are two wars being waged right in our own backyards. Enter Tapped, a film that was named one of America’s Best Life Changers by “Extra.” And for good reason, the film delivers a shocking jolt of reality that will have you re-examining your responsibilities as a consumer.

“Not only are we in a water crisis in which two-thirds of the planet will be without drinkable water in just 11 years,” says director Stephanie Soechtig, “but multinational corporations are literally pillaging communities around the country for this precious resource and bottling it into the very bottles which contribute the plastic soup in the middle of the Pacific Ocean.”

In the same vein as An Inconvenient Truth and Food, Inc., Tapped, Soechtig’s first feature, paints a picture of a David and Goliath style battle between big business and basic public rights for water ownership, and it highlights the health risks posed by plastics.

Co-director Jason Lindsey is quick to point out that with the economy the way it is, Tapped isn’t aiming to bring down the plastics industry, but it is important to think about the way companies are spinning the issue and how the government is helping them to do it. But it’s not some sort of Michael Moore-esque crock of anti-government propaganda.

“When a company says a thing is good, it means it’s good in their interests, but is it good for us? Maybe not,” says Lindsey. “Plastics is a massive industry, and sometimes morals get pushed to the side. It’s protecting an industry that hires thousands of people, puts food on people’s table. There’s all kinds of ways to justify thinking, ‘I’m going to have bend the truth a little because I’m feeding people’s families,’ instead of, ‘If I bend the truth a little, I’ll be hurting a lot of people.’”

Some of the facts presented in the film are really surprising. For example, Los Angeles’ tap water was named the best-tasting tap water in the country last year at the Berkeley Springs International Water Tasting. This may be because a lot of the country’s tap water is held to much stricter regulations than bottled water is.

Also, some plastics have harmful chemicals in them that can leech into the water they hold. And to add insult to injury, even though many of us would consider ourselves to be environmentally conscious in our efforts to recycle our plastics, the reality is that most plastics will end up in a landfill or in the ocean sooner rather than later. And we all know that plastic basically has a half-life of never.

“It’s not always black and white, there’s a lot of grey area,” Lindsey says. “What’s the right thing to do? It really comes back to us.”

Tapped offers lots of little ways to do your part. For more information, visit tappedthemovie.com.