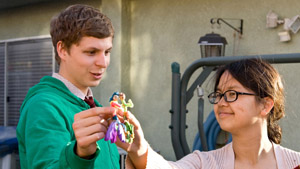 When Michel Gondry and Charlie Kaufman unleashed their collaboration, Eternal Sunshine of the Spotless Mind, it immediately made it to the top of favorite film lists everywhere. Now there’s a new movie that will do for falling in love what the aforementioned did for breaking up.

Paper Heart stars alt-comedienne Charlyne Yi as … well … herself. Yi proclaims that she’s never been in love and sets out on a quest to discover what l’amour really is.

In the process, she meets and develops feelings for actor Michael Cera (Yi’s purported real-life beau). The two fumble hilariously into a quirky “romantic” relationship of sorts.

He’s clearly falling for her. She – not so much?

So Yi travels the country interviewing couples about their respective love stories. Many are sweet and funny and compelling. She even meets with experts to unlock the science behind love in an attempt to understand why she just can’t get with the program. All the charm and confusion is captured by the couple’s mutual friend, Nick (played by Jake M. Johnson).

You may have heard early buzz about Paper Heart from the 2009 Sundance Film Festival. The film, which is part documentary, part mockumentary and part DIY stunner (Each couple’s love story is narrated as artistic renderings as the action plays out onscreen.) is just about the coolest thing to hit theaters this year.

In this day and age of apathy, it’s so easy to relate to Yi’s somewhat detached caricature of her herself. It’s a much safer bet that she’s simply socially awkward around boys she actually likes in the romantic sense, as opposed to being incapable of loving someone.

That’s where Paper Heart becomes golden. There’s not a moment of the film that isn’t relatable.

It’s nice to FINALLY have a female protagonist who is openly jaded and dorky and not just “dressed down” tits and ass on two legs. Yi is a girl that all females can get behind because she’s how a lot of bombshells view themselves on the inside and how most young women actually look on the outside. As friends and bystanders weigh in on every little detail of the relationship between Cera and Yi, the two main characters become no different than any other couple out there trying to make sense of themselves and their feelings.

Add great cameos from many of Hollywood’s hottest young stars like Seth Rogen, Jonah Hill and Demetri Martin, and you’ve got yourself one crazy-entertaining and sparkling love story.