Bandslam's Alyson Michalka: Will Rock You With Her New Movie and Music 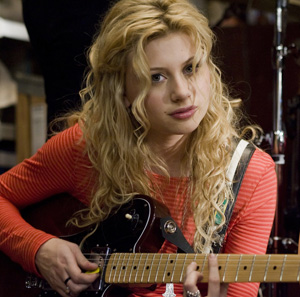 Alyson Michalka, known to just about anyone under the age of 18 as Aly, Disney Channel star and one half of the sister act musical duo 78violet (formerly Aly & AJ), wants to rock you. Her two latest projects, the feature film Bandslam and a new untitled album hitting stores this fall, are all about a stronger, more mature Aly.

“I’ve always wanted to do feature films, so this is a big deal for me” Michalka says when asked about Bandslam.

The film follows a group of teenagers who come together over their shared love of music and compete in the ultimate local talent competition. Co-starring fellow Disney darling Vanessa Hudgens and newcomer Gaelan Connell, Michalka plays Charlotte, a high school legend – prom queen, cheer captain, a girl so popular and adored “she has her own Wikipedia page” – who gives it all up to be part of a rock band.

Michalka reveals she has always had concerns about working on a project that required her to exploit both her acting and musical talents, but after reading the film’s script, she was intensely “attracted to the character and the integrity of the movie” and decided to give it a shot.

“I auditioned and played a song by Aimee Mann called ‘How Am I Different’ on the piano,” Michalka recalls. “Everyone was pretty much being accompanied by the pianist, but I decided to accompany myself, just because I’ve been playing for so long, and [director Todd Graff] was like, ‘Oh my gosh. That’s so awesome!’ and started thinking maybe Charlotte should play the piano.”

While her musical ability helped her win the role, it also placed many more demands on the performance. Once she arrived on the film’s Austin, Texas, set she was expected to play piano, guitar, sing and act.

“It was a lot of pressure to have to do [all of that] in a movie and be really strong [at everything],” she admits.

It could be argued that all the elements that weighted so heavily on Michalka are all the things she does regularly anyway.

When asked why she felt such intense anxiety about doing the things she’s built a career around, she says without hesitation, “I think, because I wasn’t with my sister, it was different. And the fact that [Graff] really knew what he wanted with this film, and I wanted to be able to portray that exactly. I’m not playing Aly, I’m playing Charlotte. I wanted to still bring myself to the character but create something new.”

Speaking of something new, Michalka is thrilled when asked about the album she and her sister just finished recording. After changing their name, they’re also changing the group’s sound and the way they make the music.

Like so many Disney stars, including co-star Hudgens, Michalka is evolving and that comes with more than growing pains; she has to figure out how to maintain her fan base while maturing with them and letting new listeners know she’s got a lot more in her bag of tricks than the record Disney execs want to hear.

“This is a record I think people will be shocked by,” she says excitedly. “It’s the Aly and AJ that we always wanted to be. We want to make sure everything is just perfect because we’ve actually never put out a record that I was 110 percent in love with. There was always one part or one song that I thought didn’t fit, but this is not like that. We’re really excited. It’s a new start for us. It’s definitely a rock album; it’s not a kid record at all.”