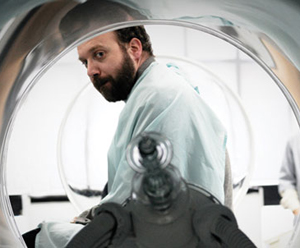 Have you ever felt like your emotions are getting in your way, preventing you from achieving what you really want? Paul Giamatti does in Cold Souls.

Giamatti, who plays himself in this metaphysical comedy, is struck with apprehension when he can’t figure out how to participate in a production of Chekov’s “Uncle Vanya” without slipping into a deep depression. But then, just before opening night, he hears about a new procedure that will extract his soul so that he can complete the production.

While Giamatti is separated from his soul, a Russian actress decides she must have it and has a soul-mule “borrow” it from the States. Bereft, Giamatti embarks on an international mission to recover what was stolen.

Cold Souls is director-writer Sophie Barthes’ debut feature, and she has produced a work that feels more like an endorsement for the soul and basic creativity than a real movie. Sure it has a plot, but it’s slow getting to it.

The movie has a great idea, strong talent (y’know, Giamatti is really a good actor) and solid cinematography, but it’s just not all that engaging. I found myself rooting more for the soul-mule than for Giamatti. I suppose on a deeper level, maybe that’s the point of the movie.