Everybody is Stupid Except for Me 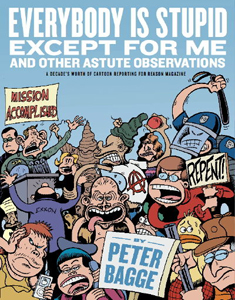 Collecting Libertarian Peter Bagge’s cartoons for Reason magazine, Everybody Is Stupid… covers topics from anti-war protests to gun control to peculiar sexual practices. While Bagge’s stubbornly egocentric view is admirable in its refusal to play favorites on the Right or Left, his cartooning leaves one wanting.

Described as “cartoon reporting,” it’s neither funny enough to be satire, nor incisive or illuminating enough to be true reporting. What you’re left with are a curmudgeon’s rants with pictures.

This points to one of the fundamentally problematic features of Libertarianism, that while it can demonstrate a lot of the absurdities of both parties, it also refuses to offer any solutions, other than “leave me alone.” Ultimately, an ideology of not having the time to be bothered with others just feels empty.

Everybody is Stupid Except for Me is currently available.