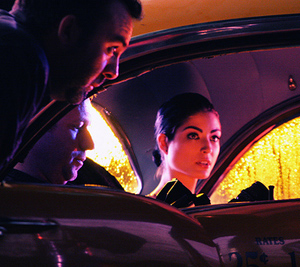 A peek at the Crystal Method’s video for “Come Back Clean”
(Credit: Shaunt & Levon Gharibian)

On Set with the Crystal Method

On July 29, electronic L.A.-based musicians the Crystal Method shot the video for their upcoming single, “Come Back Clean,” at a studio in Hollywood. The track is the third single from their latest album, Divided By Night.

The video features Ken Jordan and Scott Kirkland of the Crystal Method as NYC cab drivers and depicts scenes of the nightly madness they see in their taxis.

If you’re an amateur or semi-pro DJ looking to further your career, you’ll definitely want to enter the Who’s Spinning on Deck 10? talent contest put together by DJ Times Magazine, Whet Travel and WebCeleb.com. Contestants have until Aug. 16 to upload their best mix at WebCeleb.com, but voting ends that day, so the sooner the better.

The Grand Prize winner will receive a complimentary oceanview cabin for two aboard the Carnival Elation as it sails from San Diego to Cabo San Lucas Oct. 1-5. The “Groove Cruise” will be a dance party at sea featuring performances from Bad Boy Bill, Scotty Boy, Scooter and Lavelle, Kenneth Thomas, Anthony Attala and many others. The winner will also have an opportunity to deejay for the shipload of beat-crazy cruisers.

Whet Travel organizes two Groove Cruises a year; in January the party boat leaves from Miami and sails to the Bahamas. thegroovecruise.com

Lily Allen, the doctor will see you now. Doctor Rosen Rosen, that is. The L.A.-based producer has completed a remix of Allen’s It’s Not Me, It’s You and is offering up his version of the album for free download.

The good doctor became interested in Allen after he saw her video for “Smile” while on tour in Iceland. When he found out that Allen was releasing all of the parts to all the songs on this new album so that anyone could do a remix, he couldn’t resist re-imagining the whole deal, leaving only Allen’s vocals intact.

“I produced, composed and mixed all the music you hear,” says Doctor Rosen Rosen. “I mixed a lot of organic sounds (pianos, strings, glockenspiel, horns) with dreamy synths, deep basses and big drums to create a totally new record.”

Rosen Rosen has previously created beats for G-Unit and remixed everyone from Britney Spears to Chris Cornell. Grab your copy of It’s Not Me, It’s Doctor Rosen Rosen for free at doctorrosenrosen.com.

Modest Mouse has released an odds-and-sods collection called No One’s First, And You’re Next. The EP features the six songs that were recently released as limited-edition, seven-inch vinyl singles, as well as “King Rat” and “I’ve Got it All (Most),” which was the B-side of the “Float On” single that is now out of print.

The EP will also be released in vinyl form; look for it at indie record stores on Aug. 18. The next Modest Mouse area appearance will be Aug. 29 at the Grove of Anaheim.

Squeak E. Clean and DJ Zegon are bringing their N.A.S.A. “Intergalactic Circus” to the El Rey Aug. 12; the pair promise that the show will include space monsters, Martian dancers and special musical guests that they picked up during their recent travels through the Universe.