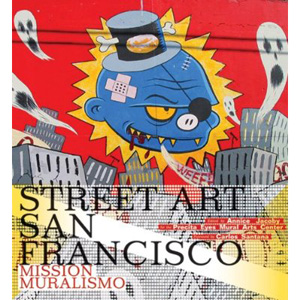 The Mission District of San Francisco is home to one of the most diverse populations in America. While hardly bigger than a few square miles, it is home to Chinese, Mexican, Central American and Filipino families as well as a host of subculture groups; hipsters, bohemians, punks, lesbians, you name it.

The neighborhood has made room for a disparity of economic groups, too, from young money dot-commers to the most desperate dregs of society, crackheads, pimps, whores, etc. The colorful makeup of its population is well reflected in the dazzling array of street art, which decorates the neighborhood. By some accounts, the Mission District has the greatest concentration of street art than anywhere else in the world.

While perusing the pages of Street Art San Francisco, the fantastic new book on the art and culture of the Mission District, I was transported to my younger college days when I lived in the neighborhood. Back then I would wander the streets, transfixed by the many wonderful and strange works of art on corners, in alleyways or posted illegally on billboards.

From the brazenly political to the subtly conceptual, the art often challenged one’s beliefs and ways of thinking. But there was also a sweetness and innocence to many murals, which simply depicted the neighborhood’s daily life.

Walking through the Mission District of San Francisco was always an adventure. Street Art San Francisco does a magnificent job of capturing the diversity and energy of one of the coolest places on Earth.