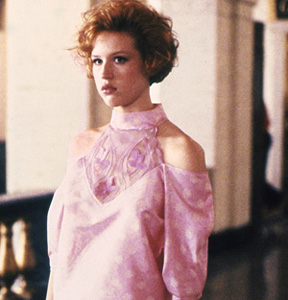 Molly Ringwald in Pretty in Pink

Even though John Hughes movies are too overplayed to be considered cult flicks, Hollywood “Almost Free” Outdoor Cinema has put a new spin on 1986’s teen movie classic Pretty in Pink, with a themed public outdoor screening where fans dress in prom attire for prizes and take pictures in a “prom night photo booth” – all in an abandoned electronics store parking lot on Sunset and Virgil.

Hollywood Outdoor Cinema started in 1992 as Fremont Outdoor Cinema, a community-run BYOC (bring your own chair) movie night held in a Seattle parking lot. The screenings morphed from casual movie watching against a wall to an interactive, themed party and the idea spread to Colorado, San Francisco and, finally, Hollywood.

This Saturday’s screening of Pretty in Pink is only the second at the HOC’s new, off-Hollywood, recession-emblematic venue, but with more space and a more centralized location, the non-movie entertainment offerings are out in full force, turning the against-the-wall screening into a nightlong celebration of all things Pretty in Pink.

In addition to passing out an Xbox 360 to the best dressed prom-goer, HOC is giving half price entry to anyone in ’80s gear and coordinating a pre-show accessory swap to ensure everyone looks their best. A resident DJ will spin Pretty in Pink’s epic soundtrack and, as with every week, there will be a mobile restaurant row.

So relive your prom! Dance to the Smiths! Wear pouffy-shouldered dresses! And eat a street dog! Then sit back on whatever blanket/chair/iron bed on wheels you bring and enjoy the last of the brat pack movies as it plays on the outer wall of a former Circuit City. 7:30 p.m.