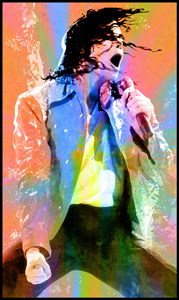 Recently we lost the King of Pop in a very tragic turn of events. In dealing with his passing, people have the choice to celebrate his career or dwell on his personal life.

Jackson was found not guilty for the crimes he was accused of, so it would be wrong to vilify him for it and imply that he’s guilty, but at the same time you can’t entirely celebrate him and ignore it, either. I have always thought of Jackson as a victim who never really had a chance at any kind of inner peace. He was born into dysfunction and thrust into even more dysfunction. His story is one of almost Shakespearean level tragedy.

The television mini-series that was produced in the early ’90s titled The Jacksons: An American Dream was very well done and had a lot of great performances but focused on the family as a whole and in four hours only covered the story up to the legendary “Motown 25” performance.

The only way to do it right is to make two movies. The first film chronicles Michael’s start in show business and covers the whole Jackson 5 saga, and the second film chronicles his legendary solo career up to his death. And fortunately for the would-be filmmakers, I doubt there’s a shortage of people who could play Michael Jackson.

In the wake of a tidal wave of offensively abysmal sequels and continuations to classic films, and the imminent arrival of more, I’ve come across a technique that may prove useful to some. Some people have already been putting this method into practice, but I have only recently been applying it. The method is called “it never happened.”

I’m not going to name names or give specific examples of the films and projects I’m talking about because not everybody has the same perspective on things. Every now-and-then an unnecessary sequel is made to a classic film. Nothing is better than classic films that either had a profound influence on all the films that would follow them, or films that were so awesome they became legendary pieces of film history.

Sometimes films get remade (more often than usual now), but the difference is that a remake is its own entity completely separate from the original. An original and its remake don’t need each other to exist.

However, a sequel asks you to believe that it is directly connected to its predecessor. A sequel takes place in the same universe as the original, and the storyteller is demanding that you accept it.

Well, I’m saying you don’t have to accept it anymore. If a sequel is an offensive slap in the face to the original, just wipe it from your memory and refuse to acknowledge it. I’m not talking about a sequel that wasn’t as good as the original; I’m talking about disgraceful sequels to great films.

Hollywood has made it very clear that it has absolutely no regard for quality, and that the almighty dollar takes priority over everything. If someone in a position of power thought that making a sequel to The Goonies where all the kids have grown up and become drag queens would make a lot of money, they’d do it.

I’m saying that even if Hollywood reaches back into the golden vault of cinema and decides to do a continuation of a classic story for the sake of making money, you don’t have to accept it. Wipe it from your mind and refuse to acknowledge it.

Don’t let a story that’s important to you be tarnished by what someone else tells you happened after it (or before it). Because if you don’t want it, then it never happened.