Dirty Three: She Has No Strings Apollo 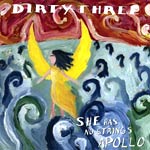 She Has No Strings Apollo is the sixth album to date from the Dirty Three, released to coincide with the tenth anniversary of their formation. Recorded in the suburbs of Paris over a span of three days, guitarist Mick Turner, drummer Jim White and violinist Warren Ellis take traditional music forms––specifically Gypsy, Gaelic and Oriental––and present them in such a compelling manner that listeners who aren’t inclined to this sort of music will find themselves addicted. The ensemble of musicians have attained the perfect balance, as each element of the recording is heard without being drowned out, a perfect state of intricate minimalism.

This album is composed of the most captivating instrumental moments in all your favorite songs, extended into an entire album. It is the soundtrack to a favorite foreign film, or to one’s own tragic, or beautiful, moments in life. In fact, the first track, "Alice Wading," bears a striking resemblance to the similarly raindrop-themed classical piece that was heard throughout the Australian film, Oscar & Lucinda, which increased the emotional impact of this already dramatic film.

"Rude (And Then Some Slight Return)" features Turner working an angular Nels Cline take on a Hendrix riff throughout the entire song, showing once again what a slim divide there is between the traditional and classical and the seemingly opposing modern rock. As it falls just as easily back to the gentle violin once more, the song eventually erupts into mutual pandemonium, without any force.

This isn’t music that can only be listened to at certain times else one might not "get it;" this is something that will bring you to its level no matter where one’s mind might be. Every one of these pieces is vibrant and alive, with absolutely no filler. Grade: A