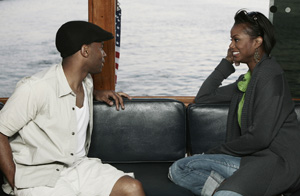 The dating world is a scary and emotional one, wrought with miscommunication, uncertainty and … awkward situations. Trying to find that special someone, even in this day and age – it sucks.

SOAPnet is trying to help all those single ladies out there in “HoliDate,” a 10-episode, original reality series focusing on two different women each week who are both successful but unlucky in love.

If you’ve seen the film The Holiday, then you can get the gist of this dating show. The women switch cities and more importantly, the boys next door!

“The idea of a Jude Law was really exciting,” admits Tai Beauchamp, a 31-year-old social entrepreneur from New York. “I was extremely nervous going through the process. To have your first blind date televised and to have cameras around made it more nerve-racking.”

In the first episode that aired July 29, Beauchamp swaps places with Christian Cloud, a 34-year-old model from the Los Angeles beach community of Venice. While in the Big Apple, Christian dates three separate men, including an owner of a successful hedge fund company and a profitable real estate broker, all around different locations in NYC. Meanwhile on the West coast, Tai’s dates take her to the famed Southern California beach, a private yacht sunset cruise and a Hollywood nightspot.

After switching dating lives, the duo realized how very much alike they are, if anything, gaining a friendship out of the social experiment. The women also gained other worldly lessons to help with dating in the future.

“I’ve learned that the package that you think you’re looking for might not be the package that is meant for you,” says a reflective Beauchamp. “This was good for me to step outside my comfort zone and do something different. I learned to be in the moment. It was a very valuable lesson.”

TV Time
(Almost) every show coming to TV this summer. And 29 that aren’t
301 views