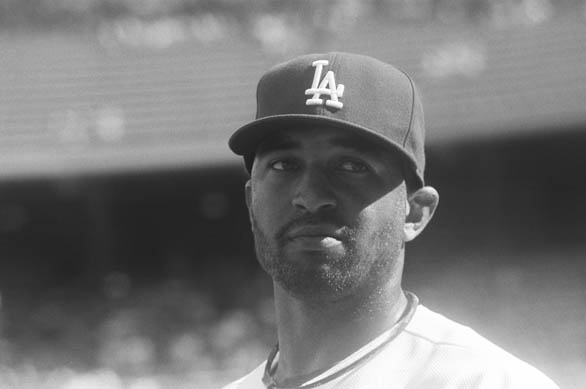 Matt Kemp: a darling of the team and fans, especially the ladies
(Credit: Tim Rudnick)

Of all of the players on the first-place Dodgers this season, the most consistent hitter has been 24-year-old center fielder Matt Kemp. Through Aug. 2, Kemp boasts the best average among team starters at .315.

His average rose above a slumping Manny Ramirez on a day when Kemp tied his own career-best by knocking in five runs on the way to a 9-1 victory over the Atlanta Braves. It would be the third time in just two weeks that Kemp played hero by getting three hits or more and leading the team to victory.

In a game against the Houston Astros July 19, Kemp scored all four runs in a 4-3 win prompting his teammates to jokingly call the game, “Matt Kemp vs. Astros.”

With 64 RBIs, 14 home runs and 22 stolen bases, Kemp has shown remarkable offensive versatility – hitting for power while remaining a terror on the base pads. Defensively he’s no slouch, either. Dodger fans have been dazzled all season by Kemp’s depth of coverage in center field and his rifle-strong throwing arm.

Less seen is the leadership Kemp provides off the field. He is unofficially the clubhouse DJ, carefully selecting the music played in the locker room after each win. Much to the chagrin of reporters trying to ask questions, the room feels more like a club than a clubhouse.

The enthusiasm and love of the game that Kemp displays is infectious, making him a darling of the team and fans, especially the ladies. With natural good looks and the manners of a southern gentleman, Kemp’s personal life has been the subject of much query. Yes, he is single, but by his own account he does not want a girlfriend.

“Only trouble,” he says with a grin when the subject comes up.

And yet the Dodger star does little in the way of discouraging the ladies. Famous for being aloof with reporters, he is surprisingly polite and respectful with female members of the press. Kemp chalks it up to a good upbringing.

“My mother taught me how to treat a lady,” he assures.