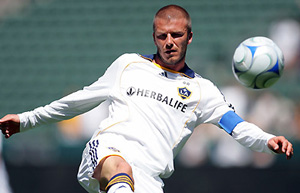 The Los Angeles Galaxy were off from MLS action, but the squad still competed in an international club friendly game Saturday against universally known FC Barcelona at the Rose Bowl in front of nearly 100,000 fans.

Midfielder David Beckham scored a beautiful goal off a free kick from 26 yards away, which proved he could still bend it like himself. Nonetheless, FC Barcelona overpowered the Galaxy in their 2-1 victory.

The fact of the matter is that FC Barcelona’s team had too many talented athletes in comparison to the Galaxy’s. FC Barcelona practically played all their subs, which were more than 10. Both Pedro Rodríguez and Jeffren Suarez netted goals for the Spanish visitors en route to their triumph.

Los Angeles, who currently sit in third place of the Western Conference, returns to action Saturday, Aug. 8, as they travel to the New England Revolution’s territory in Boston. Kick-off is at 3 p.m.