An Open Letter to Mitch Mustain 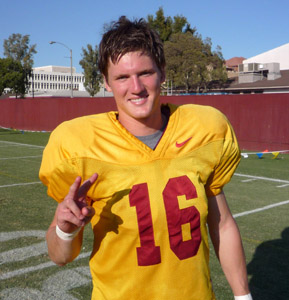 Normally, I do not write open letters like this. But, considering your predicament, I had to make an exception, just this once.

As Trojan football camp begins this coming weekend, you will be watching a thrown football spiral through the air and into the hands of a Trojan receiver. In fact, you will regularly see plays just like this all day. Too bad you will see the ball leaving from the fingertips of Aaron Corp.

Thing is, I am confused. After all, didn’t you leave the University of Arkansas for this very reason? I thought you were so upset that coach Houston Nutt benched you in favor of sophomore Casey Dick that you just had to leave that school for another program that would give you a starting position.

I am sure you were not happy Nutt said you had less “experience” than Casey. After all, you were 8-0 as a true freshman! Who needs experience when you have results?!

Yet, here we are, three years later. You are still pacing the sidelines. You left Arkansas for Southern California, and since coming to the land of the Trojans, you have played in just six games and attempted just 16 passes.

Okay, sure, your first season here at USC, you were red-shirted, meaning you couldn’t really play a game. Pardon granted for 2007.

Fine, last season, it was all about Mark Sanchez, a senior who was definitely going to get the starting nod over you by mere rank. I will turn a blind eye to 2008.

But, what is your excuse in 2009, buddy? Your competition comes in the form of freshman recruit Matt Barkley and sophomore standout Corp. Aren’t you a junior this year? Aren’t you the highest-ranking quarterback on the team by class?

Didn’t you have that perfect freshman season to hang your hat on? I mean, come on, Mitch, you have a 61-2 record as a starter, going back to your junior high school days!

So, what happened, Mitch? How come Corp got the nod instead of you? For the first time, you can play the whole “I got experience” card, and this is what you are doing with the opportunity?

I mean, justify why to me, and to all of college football for that matter, the reason why you are at USC. At this point, I will accept just about any excuse.

Tell me you wanted to learn from Pete Carroll, who is apparently regarded as the greatest coach in the game right now, despite the alleged recruiting violations that are suddenly tainting both him and your former (and current) teammates.

I will even accept the argument that you are the next Matt Cassel, coincidentally the last highly-touted star quarterback to never start a game at USC, a perennial backup in college becomes a highly-paid starter in the NFL. Heck, I would even believe you if you told me you really came out here just for the sun, sand, surf and all other beautiful things associated with living in Los Angeles.

But do not tell me you legitimately believed you would become the next heir in a recent quarterback lineage that included Carson Palmer, Matt Leinart, John David Booty and Mark Sanchez. I am sure there were other quality Division I programs who might have had you as their main guy – and it’s not like USC is the only school who produces quarterbacks. Just ask Matt Stafford, who was the top pick in this year’s NFL Draft. Last I checked he went to Georgia.

So what’s the deal, Mitch? How did you let another sophomore take the passing reigns away from you? Just what, exactly, were your plans at USC and what, if anything, went wrong?

I look forward to your response.

The Sports Wanderer
Welcome to the Pacific-12
44,934 views

The Sports Wanderer
Gagne With the Wind
2,374 views

The Sports Wanderer
Godzilla Dons Halo in The Bronx
2,466 views

The Sports Wanderer
Jerry Busses to the Famed Hall
2,297 views

The Sports Wanderer
Get Rid of the Clippers
2,793 views

The Sports Wanderer
A Bleeding Heart for Vinny
3,187 views

The Sports Wanderer
No Angels In This Bracket: 2010 March Madness
2,354 views

The Sports Wanderer
Kobe Opting Out of Los Angeles
2,323 views