Audioslave: Being an Audioslave Means Chris Cornell Works All the Angles 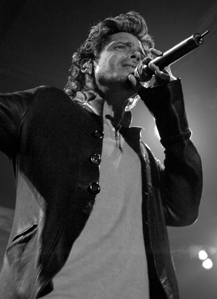 Confidence, thy name is Chris Cornell.

"Really, we weren’t too worried about anything this time around," says Audioslave’s lead howler during a recent phone interview from Los Angeles. "The first record did really well, we toured to enthusiastic audiences, and we were taken seriously as a band. Now, it’s all payoff, payoff, payoff, without any of the mysteries."

Indeed, Audioslave’s comeback is already off to a strong start. The band’s new single, "Be Yourself," quickly shot to the top of rock radio playlists, and its current tour of clubs and theaters is sold out, including a recent stop at the Quest.

Things weren’t always quite so rosy, however.

After Zack de la Rocha left Rage Against the Machine in 2000, the remaining three members enlisted Cornell, formerly of Soundgarden, as vocalist for Audioslave. Songs were recorded, and an OzzFest slot was announced for summer of 2002.

Cornell left the fledgling supergroup that summer, but he returned in time for the band’s self-titled debut, which hit shelves late that year to middling reviews and speculation about how long the seemingly strained relationship would last.

Fans, however, quickly took to Audioslave’s sound, which jettisoned the artier aspects of Rage Against the Machine and Soundgarden in favor of straightforward, Led Zeppelin-esque rock. The album went double platinum and spawned five singles that kept Audioslave on the radio for nearly two years.

"It’s like a sociology experiment in a way," he said. "It’s no longer three guys with one dynamic – and a fourth person. The whole dynamic is completely different. It’s changed not only how they think of me, but how they think about each other.

"At the end of the day, we’re just four sweaty guys in a dark, stinky room, making music. When you look at it that way, it makes it easy to understand how we work."

As such, Audioslave recorded some two dozen tracks for its sophomore disc, Out of Exile. It’s set for release May 24, but Cornell and company were still tinkering with the record’s final lineup one month ago.

"We were supposed to figure that out last night, but we didn’t," Cornell said with a laugh. "I feel like 10 of the 12 songs are obvious. It’s that final two that are difficult to choose. There’s really no clunkers or filler. Every one of these songs could do well on radio."

Cornell said the numbers that don’t make the cut will form the base for the next Audioslave album, which he’d like to release sooner than later.

"I’ve always wanted to do something closer to an album every year or year-and-a-half," he said. "In Soundgarden, it felt like the industry put too much importance into each new release – it had to be the second coming and some epic thing every time. It created tension and pressure on the band. And it takes too long.

Out of Exile will be released May 24. Audioslave will play a free concert on May 18 on Hollywood Boulevard. The band will also perform at the Wiltern LG on May 20. For more information, visit www.audioslave.com.