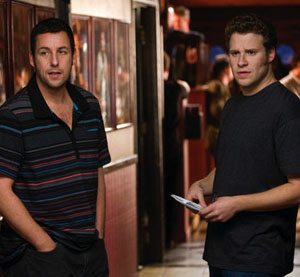 He’s being called the next great American filmmaker, doing for dorky Jewish dudes what John Hughes did for disenfranchised suburban youth. Now Judd Apatow is back with his hat trick: a “little” film called Funny People.

In the comedy, Adam Sandler plays George. He’s a cherished comedic actor (similar to Sandler) who has lived a fabulous but empty existence in the limelight. When George heads to the doctor to get some test results, he’s told that he’s suffering from a terminal form of leukemia that may or may not be curable with experimental drug therapy.

This sends the comedian into an emotional tailspin. That night, he heads back to a local comedy club to vent, performing a dismal set. There, he makes the acquaintance of Ira (Seth Rogen).

Ira’s not the best comic in the world, and his roommates (Jason Schwartzman, Jonah Hill) never let him live it down. But George finds some of his material funny and hires him to write jokes for an upcoming corporate appearance at MySpace.

The jokes are a hit, and George decides to bring Ira on full-time. Ira helps his ailing mentor through the tough times, and George gives his young protégé a taste of the good life.

With Ira’s prompting, George decides to reach out to friends and family and let them know about his sickness. Among the list is George’s ex-girlfriend, Laura (played by Apatow’s real-life wife, Leslie Mann). The former couple rekindles their relationship, even though she’s married to an Aussie douche bag named Clarke (Eric Bana) and has two kids.

Life is messy and so is the night when worlds collide and George and Laura’s fling is uncovered. Ira and George have a falling out, but in the tradition of Hollywood, everything ends with a nice, shiny red bow on top.

Apatow is terrific at writing ensemble pieces and doing so with sweetness and plenty of wit. I laughed straight through this movie (yes, it DOES live up to its name).


Funny People is currently in theaters.
Article posted on 8/6/2009
This article has been viewed 1529 times.