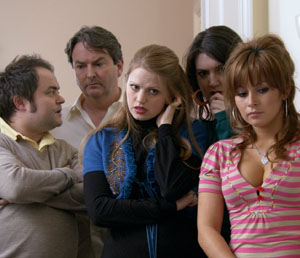 Americans don’t tend to get British humor. And you know what, I totally understand. I mean, aside from Richard Curtis, Edgar Wright and the Monty Python films, British comedies are dry compared to the cinematic fare America is used to.

Unless you’re a film major (or have just watched so many movies your brain is mush), you’ve probably never heard of St. Trinian’s, Beautiful People or Michael Winterbottom. Did you even know Gosford Park is a comedy? Yeah, thought not.

Of course, this also means that you also haven’t seen 12 in a Box. In this Ealing-style comedy (If you don’t know what that is, think Kind Hearts and Coronets. If you have no idea what THAT is, go rent it. Now!), 12 people have convened for a school reunion, but instead of an afternoon of polite conversation, the attendees are told they will each collect one million pounds.

The catch is that they all have to live together for 96 hours. There is no leaving the property, no outside calls and no explaining to outsiders.

And everything is going well, until one of the guests drops dead. That’s when things really start to get interesting.

12 in a Box was made in 2006, but it’s still smart (in the witty, British sense), funny (again, think dry and British) and surprising, without being pretentious or hackneyed. There are few dull moments, and it actually succeeds in pulling off the twists.

It’s got a subtle, macabre humor that is the updated epitome of an Ealing comedy, complete with a classic Ealing ending. Not to mention the brilliant acting from the completely unknown (outside of the UK anyway) actors.