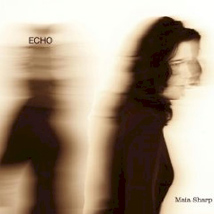 Maia Sharp’s new album, Echo, contains songs that could be a part of a Sheryl Crow CD, but Sharp’s voice lacks the energy that Crow supplies.

The first track, “Polite Society,” can make for a great jogging song, and that’s about it. “John Q. Lonely” is one of those songs you have to listen to many times. Not just because it is so good you cannot get it out of your head, but because the meaning needs more time to settle in your bones, and the lyrics and music, which are impressive, force the need to re-listen.

I had great expectations for “Death By Perfection,” especially because it features Bonnie Raitt, but her voice doesn’t really appear until the end of the song; disappointing for a duet. “You Are Mine,” “Unbreakable” and “Why Do You Want to Know” are the best songs on the album. These are songs that many can relate to and are delivered by Sharp with an honest tone. I say start with track four, “You Are Mine,” and go to the end of the album before listening to the first three tracks.