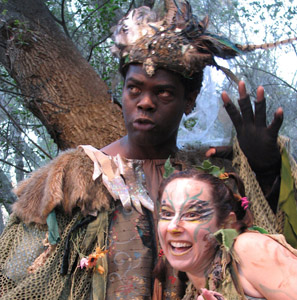 History’s most famous bard wrote “A Midsummer Night’s Dream” the same year he produced “Romeo and Juliet.” However, many bibliophiles and Shakespeare enthusiasts agree that it was not the tragedy of love between the Capulet and Montague that marked the playwright’s genius, but rather it was his comedy about fairies, love and mischief that has kept historians and readers enchanted for centuries.

In this production, the ancient text is richly infused with wonder and merriment by the charming cast of actors, as well as an entrancing stage that sees no need of grandiose decorations and lavishly ornate props. Instead, the tale of lovers who try to escape an arranged marriage and the decorum of Athens society by hiding out in the forest one summer’s night is brought to life in an intimate setting. Naughty Puck, dimwitted Bottom, crafty Oberon, Helena, Hermia, Demetrius and Lysander: The gang is all here.