I Love You, Man Hits Stores 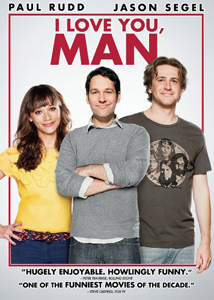 One of the best comedies of the year, I Love You, Man stars the eminently likable Paul Rudd and Judd Apatow vet Jason Siegel. As his wedding approaches, Rudd realizes he has no friends of his own. So he goes on a series of man dates in an attempt to court a new buddy. Siegel and Rudd make a great team, with Rashida Jones, Jon Favreau and Andy Samberg in supporting roles.

Although he made only three films, James Dean is a legend. James Dean: The Fast Lane culls the actor’s harder to find early work, from TV appearances to a Pepsi commercial and his final driving safety PSA. Also included in the two-disc set Robert Altman’s The James Dean Story.

In a time of magic, a ragtag group of warriors team up for adventures in search of fame and fortune in The Slayers: The First Three Seasons.

The original U.S. cast reunites for Fullmetal Alchemist: Premium OVA Collection, including an interactive story and a live action featurette.

New Zealand’s answer to Tenacious D return in Flight of the Conchords: The Complete Second Season. The show follows the adventures of a clueless folk duo struggling to make it big in New York. Their deadpan poetic songs on inane crises are priceless.

90210: The Complete First Season: Same zip code, different group of spoiled brats. It dishes up plenty of the sordid high school drama audiences are insatiable for. Fans of the original will appreciate the return of Jennie Garth, Shannen Doherty and Tori Spelling.

Utilizing reenactments of his personal journals, In Search of the Great Beast 666 brings to life the history of “the wickedest man in the world,” Aleister Crowley. Crowley, a self-styled magus, author, social critic and mountain climber, has remained a fascinating iconoclastic figure.

From Peru’s Nazca Lines to Egyptian hieroglyphics appearing to illustrate a great pharaoh operating a spaceship, “Ancient Aliens” examines the possibility that early civilizations were visited by extraterrestrials and given knowledge that allowed them to create the world’s first computer and battery. Wishful thinking? It doesn’t really matter. It’s as fascinating as “The X-Files.”

The Mafia, a History Channel megaset contains 10 hours of documentaries covering from the rise of organized crime up through John Gotti and everything in between, including prohibition, the unions, Bugsy Siegel and JFK.

Audience of One is billed as Jesus Camp meets American Movie. It’s a train wreck of a documentary focusing on a San Francisco preacher who, on God’s orders, sets out to make the biggest sci-fi Biblical epic in the history of movies.

Also available: A Life Among Whales, The Unwinking Gaze

One of the funniest movies ever made, This Is Spinal Tap, comes to Blu-ray. The mockumentary directed by Rob Reiner, stars Christopher Guest, Michael McKean and Harry Shearer as an aging heavy metal band. The disc comes loaded with extras, included a feature’s worth of deleted scenes.

John Carpenter’s 1986 cult favorite, Big Trouble in Little China, makes its way to hi-def. Kurt Russell stars as a swaggering yet goofy trucker who becomes embroiled in an ancient mystical war in San Francisco’s Chinatown. A synopsis can’t possibly do justice to this blend of action, comedy and general ’80s weirdness. Kim Cattrall and James Hong co-star. Also included is a jocular commentary track with longtime collaborators Russell and Carpenter.

Led by Daffy Duck, the Looney Tunes spoof Ghostbusters in Quackbusters. The legendary Mel Blanc provides voices for all of the major characters in his final gig. Also included are three bonus shorts.