District 9: Where did these aliens come from? 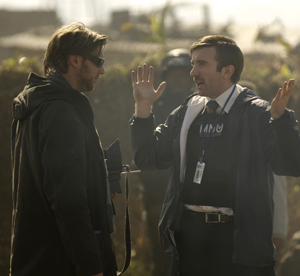 District 9 is a thoroughly entertaining film, rich in visual detail and littered with the kinds of big ideas that are the hallmarks of great science fiction. Even more remarkable is that this film is the first feature-length project from writer-director Neill Blomkamp.

The movie chronicles the plight of extraterrestrials who are marooned on our planet and the unlikely bond they form with a South African bureaucrat named Wikus van der Merwe, played with an explosive range by actor Sharlto Copley.

Blomkamp recently took time to discuss how this idea came to fruition.

“The genesis for the film came from a short film I did in 2005, which at the time I was directing commercials. And what I would do between commercials is, I would do these crazy short films to kind of just mess around with different ideas, and I had an idea of putting western science fiction that I’d grown up with into South Africa and into this African setting. And that’s what Alive in Joburg was. So, when it came time to turn that into a feature film, the first thing was to kind of set up the world of District 9, to take the short film further and flesh out the universe of it more, and then from there you could decide what point of view you wanted to see the story from.”

Since this tale of oppression is set in South Africa, the first point of view that many see is the similarities to apartheid, though Blomkamp is quick to point out that there are other influences at work, too.

“There is another element that should be noted,” Blomkamp adds, “that is, with the new black governments since 1999 onwards, it’s become a real issue that – like there are illegal immigrants in the U.S. – there is a very high number of illegal immigrants in South Africa that are mostly Zimbabweans, because Zimbabwe is collapsing, and they are crossing the border into South Africa. So, if you forget about apartheid for a second, and you forget about white oppression, there is a whole other social dynamic going on with impoverished Zimbabweans who have come to a richer country in search of a better life and have ultimately ended up in many of the same impoverished townships that the impoverished black South Africans live in. So there’s that mixed with … the white South African military industrial complex and apartheid government, and a lot of that segregation and imagery makes up the background of the film, the fabric of the film.”

Also, it has been well documented that Blomkamp was attached to direct another science fiction property, Halo, but that the project was crippled by studio interference. Did the experience of working on Halo impact the genesis of District 9?

“The conscious answer is ‘No.’ If you work on something for five months, day in and day out, you want to make sure that you’re going as far away from that as you can possibly go from it. What I think is true about Halo and District 9 is that Halo is definitely influenced by the world of James Cameron and Aliens and probably [Robert] Heinlein and Starship Troopers. Halo is an amalgamation of many different pieces of science fiction, and District 9 is as well. Both are drawing from the same 50 years of history in western sci-fi, but consciously there’s zero connection to the two.”