It Might Get Loud: Jimmy Page, the Edge, Jack White: What Makes Them Riff? 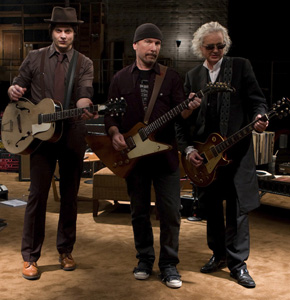 (l to r) Jack White, the Edge and Jimmy Page in It Might Get Loud
(Credit: Eric Lee, courtesy of Sony Pictures Classics)

At first glance, It Might Get Loud could be perceived as just three guys sitting around a room talking about the electric guitar. Except the three guys are Jimmy Page, Led Zeppelin’s legendary ax-man, U2’s the Edge and Jack White of the White Stripes, the Raconteurs and the recently formed the Dead Weather – basically, three of the coolest, most influential and dynamic guitarists alive today. (No disrespect, Richie Sambora.)

Helmed by Davis Guggenheim, the Academy Award-winning director of An Inconvenient Truth, It Might Get Loud is a visceral, enthralling, unforgettable piece of artistry that delves into the way music is made, the cultivation of these artists’ individual sounds, the dialogue melody creates and the meaning sound has in the lives of those whose music informs our own existence.

Producer Thomas Tull (300,The Dark Knight) initially approached Guggenheim with the idea of a documentary about the electric guitar.

“We realized there are a lot of music documentaries or music movies that felt lacking to us,” Guggenheim recalls. “They were about everything but what the artistic experience was: car wrecks and overdoses or a film filled with platitudes about how so-and-so changed music forever. We weren’t trying to be a Top 10 list or encyclopedic, we were just trying to get underneath the characters of people who express themselves in a way that’s kind of a mystery. When you hear an electric guitar, there are no words, so there’s nothing to associate or quantify, nothing you can put on Wikipedia that someone can look up. [We thought], ‘What if we made a movie about something no one’s ever described before in the proper way?’”

They agreed the three artists they wanted to follow were Page, Edge and White, who all immediately agreed to participate, and the process began with long sit down interviews and no cameras, just tape recorders. Guggenheim took the audio, edited it together and used it as a template for shooting.

White, cloaked in head-to-toe black, his face tucked under a porkpie hat, describes the filmmaking process, much like the song writing process, as “a genesis.”

“This was incredible,” White says, “because Davis gave so much leeway into what we were going to do. [That’s] why I got involved in the first place. If he’d sent a script that said, ‘We’re going to be doing this, this, this, this and this,’ then it wouldn’t have been as interesting and creative for any of the people involved.”

It was the film’s exploration of music as the ultimate storyteller that Page found compelling.

“I think music can always be a life changing experience, or life affecting, at least,” says Page, who has a genteel air unexpected of a rock star who shaped the 1960s and ’70s. “There’s music that people will always relate to, that point when they heard it, when they experienced it. Whether they’re playing it or you’re receptive as an audience.”

While they all arose in different eras and have decidedly different sounds and styles, one commonality the three musicians share is they were all self-taught.

“It’s not like we’re part of an orchestra where everyone’s been taught the same way, and it’s sort of varied areas of interpretation,” Page explains. “The character of what we’ve lived is in our music.”

It was their individual but shared brilliance that Guggenheim used as the ultimate template for a film about music at its purest and most profound.

“There are many, many people who can play guitars note-perfect and are virtuosos,” Guggenheim says, unmoved, “but I wanted people who were searchers, people who really inspired us and whose stories said something more than, ‘Here’s a hit.’”

It Might Get Loud releases in select theaters Aug. 14.