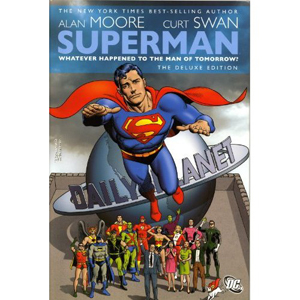 In the mid-’80s, around the time he was starting his run on Swamp Thing and before Watchmen, Alan Moore was a promising young writer about to explode. DC brought him on to close a chapter on Superman, tying together all of the loose ends before they gave the character a fresh start. He was to write the end of Superman.

The resulting title story is a two-part apocalyptic tale in which all of Superman’s villains descend on the Fortress of Solitude. Also included is a Swamp Thing crossover issue and For the Man Who Has Everything, in which Superman hallucinates an existence on a Krypton that was never destroyed.

Picking up where Moore left off, Neil Gaiman was hired to do the same for Batman. The result is surely the trippiest Batman story ever told, in which Bruce Wayne watches his own funeral with enemies and friends alike in attendance. Also included are Gaiman’s addition to Batman: Black & White and three other short stories, including the Riddler’s origin tale.