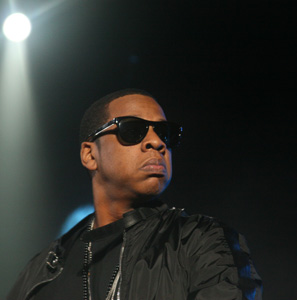 Jay-Z held it down at APW in the Beatie Boy's absence.
(Credit: Nate Slevin)

In its sophomore year, the All Points West festival once again set up shop in Liberty State Park on the New Jersey side of Liberty Island. Fans poured in by boat, train, bike or whatever mode they could and enjoyed a few bright, sunny, afternoon sets. Then came the rain.

Friday’s onslaught, which splashed down mid-afternoon and kept on keeping on throughout the night left its mark on the festivities, turning the entire grounds into a giant mudpit, sprinkled with thick pools of watery, gooey sludge that claimed a ton of footwear, but stopped no one. Fans danced, slid, dove and, of course, even wrestled in the muck until the last squash on Sunday night.

The lineup prevailed, and Yeah Yeah Yeahs, Jay-Z and the evening’s other artists held nothing back. The National’s Matt Berninger even leapt into the crowd to perform “Mr. November,” out in the goo with his fellow swamp monsters.

The downpour caused the fest’s organizers to allow any Friday ticket holder another free admission for the weekend, and even despite Sunday’s delayed opening of doors that cost a few artists their slots, the weather made for a most memorable weekend and gave the festival and its fans a (slightly muddy) badge of honor.