Team Sleep: Build a Solid Team through Music and Friendship 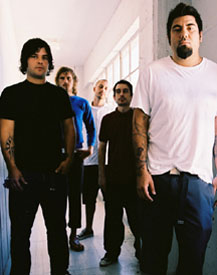 Eleven years ago, two childhood friends laid down 60 dollars on a used four-track recorder. Two weeks at a time, guitarist Todd Wilkinson and vocalist/guitarist Chino Moreno would take turns making tapes and exchanging them whenever they had free time.

Flash forward a few years to find Moreno leading his full-time band, the Deftones, around the world amassing rabid fans and critical praise. After lending his skills to a track on 2000’s White Pony for the Deftones, DJ Crook began contributing to Moreno and Wilkinson’s tape collection. A year later, the rest of the Team Sleep’s key players – Zach Hill on drums and Rick Verrett on bass – joined the roster.

"We’re all friends. We all made the music at home by ourselves. Crook did the beats at home and I played the guitar parts, wrote them and recorded some of them at home. Then, we’d get things back from each other," Wilkinson remarks. "We’d do things individually so it’s got that part of it, but also we’re friends. We wouldn’t be playing music with anybody else other than our friends. That’s a big part of it and it shows."

The fact that Team Sleep’s members are so strongly intertwined as friends has fueled the band’s fire over the years. Originally, their debut was to be released in 2001, but after unfinished tracks were prematurely leaked to Internet and radio, the band decided to hold off and continue to work on new material. The Passportal," a song released on 2003’s The Matrix: Reloaded soundtrack, formally introduced the world to Team Sleep’s ambient, trip-hop sound, garnering comparisons to Massive Attack.

Even with Moreno on the road with the Deftones, Wilkinson in Sacramento, and Crook in Los Angeles, there was no stopping the exchange of musical ideas between the trio, spurred on by their shared passion for music.

"There’s a lot of times when you’re feeling fucked up and it all just makes no sense. You make music and it makes a little bit of sense," Wilkinson comments. "When I was younger, when I’d feel fucked up, I would go skateboarding. I would get hurt and that was like a way of dealing with it. But now, it’s like I don’t want to get hurt anymore. Music does the same thing."

Graduating from that used four-track to digital equipment, Team Sleep’s self-titled debut has finally hit shelves. Crook states that he is "really excited to get it out. I’m confident in the record, so I just want it to come out and have people hear it."

Wilkinson describes the collection of songs as being "warm," while Crook elaborates, "There’s no angst in it. There was no pressure."

Since there was no pressure in making the album, the trio took their time perfecting the tracks and relishing their artistic freedom, especially Moreno who was free to depart from his Deftones persona. Their freedom also includes vocal contributions from Mary Timony, formerly of the band Helium, and Pinback singer Rob Crow, who both feel like natural additions to the album.

"We’ve all been friends with Pinback for a long time," says Wilkinson about the match-up. "We were just hanging out, and then he just woke up in the recording studio. That’s when he did it – he did four songs in two days. I love those songs."

Wilkinson is quick to point out that the main motivations for Team Sleep are simple. "I don’t think we need to get any more complicated than saying we just love music and we’re friends. That’s it. Oh, and we want to do cocaine and strippers (laughs)."

All joking aside, the band successfully melds layers of sound into a richly textured cohesive unit that is reminiscent of places only visited in dreams. The image on their album’s cover – a woman lying on a bed enjoying a seemingly post-coital drag on a cigarette – says it all. It’s almost as if she’s inviting you to join her as you melt into dreamland with Team Sleep as your guide.