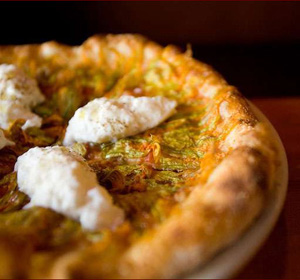 Unfortunately, Mozza2Go doesn’t measure up to the original.

There is nothing cheap about the eats at Pizzeria Mozza or its newly opened counterpart, Mozza2Go. You might be thinking: How can pizza not be cheap? Because it’s not just pizza, it’s pizza of the gods; those gods being named Mario Batali and Nancy Silverton.

I’ve eaten at Mozza in the past, and each time was an utterly transcendent experience. From the perfectly fried squash blossoms to pizza that’s so sublime you happily fork over almost $20 bucks for four slices, Mozza has always been one of the crowning glories of the L.A. restaurant scene.

That’s why it was such a massive let down when I embarked on my meal from Mozza2Go.

It could be argued that $10 to $18 really isn’t that much for pizza, especially not artisanal pizza baked in a wood-fire oven, but in these tough times, it is for me. That’s why I was thrilled when my dear friend invited me to dinner and a show at the Hollywood Bowl.

Ninety-eight dollars and 45 minutes later, we settled into a box and unpacked our treasures, giddy like little girls at a Jonas Brothers concert. But the excitement waned quickly and gave way to intense disappointment.

The salads we’d selected were a fraction of the size they are in the restaurant, and the food, in its sustainable packaging, was sadly tepid. The Farro, Cucumber, Tomato and Feta Salad ($8) was a scant cup and a half of grain and vegetables drowning in a sea of dressing. It was so aggressively over-sauced, it was like eating olive oil and vinegar soup with a side of feta. The Caprese ($12) offered a few tomatoes, some burrata cheese and an irksome build-your-own requirement, while the Rucola, funghi & Piave cheese salad ($14) revealed itself to be nothing more than a bowl of arugula, some parmesan-esque cheese and too-garlicky dressing.

The pizzas, we were sure, would save the day. They did not.

The Bianca, a white pizza with fontina, mozzarella, sottocenere and sage ($18), and my goat cheese, leeks, scallions, garlic and bacon number ($15) were rock solid and tasteless. The Bianca became a sea of congealed grease, while mine resembled dried lawn clippings on slack dough surrounded by a moat of the hardest, least tasty crust I’ve ever endured.

Whether the problem is that Mozza simply isn’t meant to travel or that the 2Go branch receives less TLC, there is unmistakably big trouble in this little Italian outpost. Worst of all, they make you pay with both your hard earned cash and your taste buds.