Crazy for the Storm: A Memoir of Survival 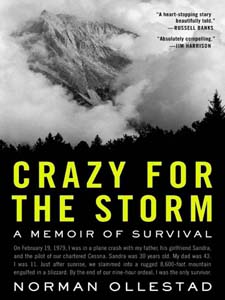 In his heartfelt memoir, Norman Ollestad relates his powerful story of survival. In 1979, Ollestad, his father and his father’s girlfriend were in a plane that crashed into the side of Ontario Peak, leaving everyone but 11-year-old Ollestad dead. Left to fend for himself in a mounting blizzard, Ollestad relives the tragedy step by painful step and examines how his father prepared him to live through it.

Ollestad’s story is told in chilling detail, but it also highlights the everyday trials of growing up in a broken home. Equal parts adrenaline-pumping thriller and fond (sometimes frustrating) memories with his father, Ollestad has crafted a book that captures the terror and tenderness of his early life. Crazy for the Storm is both for those who surf or ski and those who have had a strong figure touch their lives.

Crazy for the Storm is currently available.