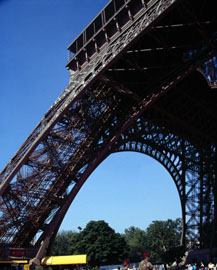 It’s possible to pay $9.25 for a cafe creme at the flashy Café de la Paix on the boulevard des Capucines near the Paris Opera, as one report on the high costs in Europe recently pointed out.

I found the prices and people-watching better at the Café des Phares near the Place de la Bastille. Coffee on the terrace was $4.60, still a bit steep, but this was Paris after all, and a sidewalk table is like a front-row seat at a French fashion show.

Turning Paris into an affordable destination is all about choices. So what if dinner at a top-drawer restaurant costs half as much as round-trip airfare from the United States? There’s always that to-die-for $7.50 bowl of onion soup at a Left Bank café where you’ll probably feel more at home anyway.

Seventy-nine dollars a night for a studio apartment with a kitchen left me with $46 out of my $125 daily budget. It wasn’t enough to pay admission into the major museums or do any shopping, but I was able to eat well and enjoy poking around free art galleries, exploring new neighborhoods and most of all, just being in Paris.

My apartment was $79 for one ($105 for two) at the Maison Zen tucked into a courtyard off the rue de Lyon in the 12th arrondissement.

Six bright studios usually rent by the week, but the owners, who run a meditation center in the same building, will rent by the night between bookings. Rooms are furnished with down comforters, marble-topped desks, wardrobes, kitchen utensils and wine glasses and have modern baths and showers. No elevator. Info at 011-33-1-44-87-0813 or www.maisonzen.com.

Use at least one ticket for a 45-minute city tour on Bus 69. It travels from the Eiffel Tower on the Left Bank to Pere Lachaise Cemetery on the Right, passing sites such as the Louvre, Notre Dame and the Opera Bastille. Avoid crowded buses by traveling around 10 a.m., before the evening rush hour or at night.

You’ll eat well in Paris no matter what your budget.

Skip the pricey hotel breakfasts and instead buy a croissant or pastry at a bakery. Take it to a café (perfectly OK) and read the paper or people-watch.

Crepes with sweet and savory fillings ($3-$5) and the long baguette sandwiches displayed in glass cases in the boulangeries – $2.50 or $3 for fillings such as Brie and tomatoes – make quick and inexpensive lunches.

For the best discoveries, forget the guidebooks and scout out the "formula" menus (main course plus salad or dessert and sometimes wine) posted outside cafes and restaurants. This is how a friend and I found Le Bar a Soupes, 33 rue de Charonne, where the $11.50 lunch special includes one of six homemade soups, a platter of meats or cheeses and a glass of wine or coffee.

Most of the major museums are free on first Sunday of the month and some offer discounts for late afternoon or evening visits.

Invest 50 cents in a copy of Periscope or l’officiel des spectacles for entertainment and cultural listings. Newsstands carry both. I use them to scope out off-the-beaten path finds such as the photo exhibit of Naples, Paris, Milan and Venice in the 1950s that I discovered one afternoon at the Maison Europeenne de la Photographie, $8 (Metro Saint Paul).

? Live music in the Paris Metro stations. Buskers playing everything from tubas to hammered dulcimers perform for spare change.

? Panoramic view of the city from the roof of the Samaritaine department store (Metro: Pont Neuf).

Gourmet treats small enough to put in a suitcase at any Monoprix store, the Fred Meyer of France. Pâtes and butter biscuits from Breton, $5-$6; Fauchon mustards flavored with white wine, $3.50; chocolate bars, $1.75.

Coffee and croissants at the Cafe Marly in the Louvre, $13. Crowded and expensive at lunch, all’s quiet in the morning and you’ll have the views of I.M. Pei’s glass Pyramid and the museum’s sculpture gallery to yourself.

ADDING IT UP: ONE DAY’S EXPENSES IN PARIS

Crepe with Gruyere cheese from a Left Bank street vendor: $3.50

Admission to the Henri Cartier-Bresson museum: $5.25

Dinner at Bistro DeLacaze near the Gare de Lyon (salad buffet, two kinds of fish in an herb-butter sauce, quarter-liter of wine): $23.15