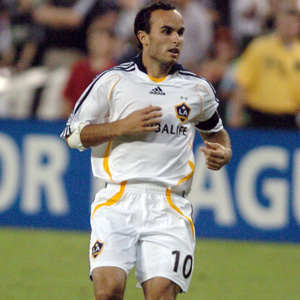 Landon Donovan of the Galaxy is solid.
(Credit: Chuck Myers/MCT)

After a glorious 2-1 road victory over the New England Revolution, the Galaxy (31 points) are now looking to take the top spot and catch up to the Houston Dynamo (38 points). The beauty of it all, however, is that the Galaxy have played two fewer games than the Dynamo.

Forward Landon Donovan continued his solid performance of the year on Saturday at Gillette Stadium by scoring a superb left-footed goal, which is his ninth thus far. Forward Jovan Kirovski netted his second of the year in the 52nd minute to make the score 2-0. New England went on to collect a goal, but it was not enough as the Galaxy took home the triumph.

The L.A. team now returns home to host the Seattle Sounders FC, who currently are in fourth place, Saturday, Aug. 15 at the Home Depot Center. Kickoff is at 8 p.m.