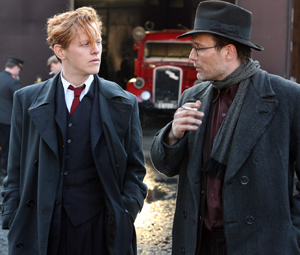 It seems each year we’re flooded with more films about World War II, and surely they’re favorites at the Academy Awards. Ole Christian Madsen’s Flame & Citron stands apart from the usual tales of the heroes and horrors of warfare that we’re exposed to. Yes, it’s a tale of heroism, but minus the glamour and romanticism of its Hollywood counterparts.

It’s 1944, and the Nazis have taken Denmark. At 23, Bent Faurschou-Hviid a.k.a. “Flame” (Thure Lindhardt) is the most wanted man in Scandinavia. An assassin for the resistance, he delivers vengeance against Danish informants and collaborators.

Ten years Flame’s senior with a family to support, Jørgen Haagen Schmith a.k.a. “Citron” (Mads Mikkelsen) drives the getaway car and risks everything to support the cause. When his frustrated wife leaves him for another man, he becomes less the driver and more Flame’s bona fide sidekick.

The film becomes a thriller when questions emerge regarding their supervisor and the motives behind his increasingly controversial assignments. Suspicion is also cast on Flame’s mysterious girlfriend, Ketty (Stine Stengade), who seems to be everything except whom she claims to be. Is she a comrade or a traitor?

What Madsen does remarkably well is exploring the moral battles that each man faced in wartime. There are those who stood idly by hoping to last out the war alive. Those compelled to fight occupation struggled to maintain their own humanity – not to become as callous as the enemy while carrying out their missions.

But to maintain that spark of humanity means coming to terms with its challenges: Flame and Citron face botched assassination attempts when their targets become too human to deal with in the methodical manner required of assassins.

War creates unlikely heroes and villains. Although Madsen focuses on glorifying his country’s heroes, what remains is the specter of his villains. This film makes it hauntingly clear how man’s natural will to survive can preclude doing what’s right.