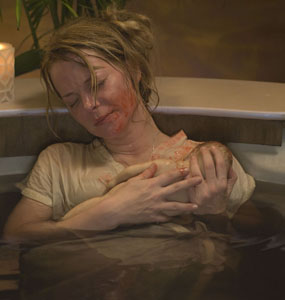 Grace tells the story of Madeline (Jordan Ladd), a pregnant mother whose unborn child dies in an auto accident. She decides to carry the dead child to term, and when she finally delivers … the baby is miraculously alive.

Madeline is overcome with joy, though very quickly she realizes that there is something dreadfully wrong with the infant. The baby attracts flies, her temperature is below normal and she refuses to nurse. Madeline discovers that the baby needs special food to survive: human blood.

Grace also has its share of subplots, including Madeline’s relationship with her midwife and her combative relationship with a domineering mother-in-law. The film deals with the power of maternal instincts, the fear of losing loved ones and the stress of caring for a newborn. It is a nice change of pace to see a horror movie wherein all the major narrative elements are centered on women.

Also, just in case it wasn’t totally obvious from the above, Grace is a horror film. It is the feature debut of writer/director Paul Solet, who based this material on his own short film. His direction is solid and very self-assured. And as a writer, Solet treats his subject matter as serious as a heart attack.

This film, about an infant with a ravenous hunger for human blood, is played absolutely straight. The only humor found here is of the blackest kind.

The cast of Grace, more specifically its three female leads, helps sell the film’s morbid set pieces. Jordan Ladd does a lot of the heavy lifting here, playing the role of Madeline, mother to the monstrous infant. Samantha Ferris is Madeline’s trusted midwife, an intelligent woman that wants to rekindle an old flame with the mother-to-be.

However, it is the mother-in-law, in an exceptional performance from Gabrielle Rose, whose character should garner the most attention. Rose takes what could have been a hideously over-the-top villainess and imbues the role with a furious emotion, as selfless a performance as you are apt to see in a horror film.

Unfortunately, this is where my accolades end. Yes, the film is competent enough and the performances are strong, but Grace doesn’t live up to the hype. It just isn’t that scary.

Morbid? Sure. Disturbing? Certainly, but cineastes yearning for an The Exorcist-level of unease and tension may be left wanting.