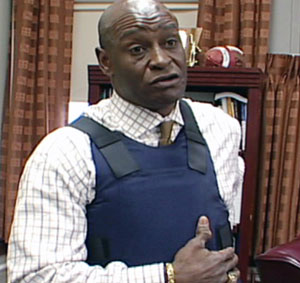 There are two core relationships examined in Heart of Stone: in the present, there is the rivalry between central Newark’s Bloods and Crips, creating the tension that forces Weequahic High School Principal Ron Stone to take a more hands-on role than is custom, and then there is the constant, decades-long relationship between Jewish and black community members that dabbles both as rivalry and alliance.

Early on, we catch wind of the nostalgia felt by Jewish WHS alumni of the 1950s and ’60s, whether on a Philip Roth-themed bus tour shot by director Beth Toni Kruvant, showing the central ward of Newark as a Jewish paradise while “Cheek to Cheek” plays off in the distance, or at a WHS football game, where a tailgate party finds alums bringing kosher sausage as a “throwback” to when the school was heavily Jewish. There is a bit of history covered in Heart of Stone, minor coverage of race riots in 1967 that had caused Jewish residents to relocate to the suburbs, only to be replaced by a greater black population. But while Jews and blacks are portrayed here as allies, it’s clear that the underlying tone of the film is one that longs for the “good old days.”

The mostly-Jewish Alumni Association (co-founded by Hal Braff, 1952 alum and father of executive producer Zach Braff) raises funds for opportunities that aim to motivate students beyond the world of neighborhood respect – scholarships, trips to France – but while these benefits are being organized, students like Crip leader Rayvon are contemplating whether college is right for a kid who’s been around the foster care system since the fourth grade. Well-spoken Blood leader Sharif is telling his mother not to smoke given tobacco’s health hazards while telling the camera – in front of her – that he’s not afraid to shoot back in defense.

Principal Ron Stone wears a bulletproof vest so he can stand outside of his school and interact with students tied to each gang, in hopes of turning influential gang leaders into positive examples at school. As noted, Weequahic is fitted with 72 cameras, as well as metal detectors; Stone, who’d been born to a teen mother, partially raised by an abusive older stepfather and exposed to students’ guns three times in his seven-year career at WHS, makes it his aim to rid his students of the mindset that “I don’t need to do school, I’m not gonna be here at 30.”

Whereas plenty of dramatic films based on stories of this sort have become cliché (and yes, please do refer to “South Park”’s “How do I reeeach these keeeds?” perspective on Stand and Deliver), Heart of Stone is less condescending than these dramatizations and manages to show the brains that warrant such tough love.