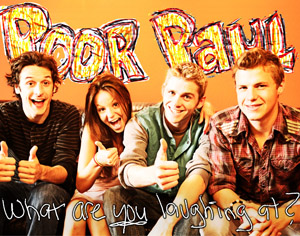 Eye Scream Films, producers of the Web series “Poor Paul,” donated a walk-on role to the 2008 Children at Heart Gala and Celebrity Auction. Fourteen-year-old Chelsea Evered from Connecticut won the auction and will appear in the series’ 30th episode, “When the Walls Come Crumbling Down,” releasing on Aug. 11 at 10 a.m. PST and available on demand on YouTube at youtube.com/watch?v=4siLjBJOQIk.

The charity benefits Chabad’s Children of Chernobyl (CCOC) and helps rescue and care for children who are exposed to, and affected by, the lethal contamination from the Chernobyl nuclear disaster. It is quite possible that this is the first role in Web series history to have been auctioned off for charity.

“Poor Paul”’s popularity has attracted such names as Guillermo Diaz (“Weeds,” Half Baked), Richard Riehle (Office Space, “Grounded for Life”), Mandy Jiroux from the “The Miley & Mandy Show” and Jessica Rose (“lonelygirl15,” I Know Who Killed Me), to name a few.

Chelsea’s mother, Charlene Evered, who accompanied Chelsea to the set, said they both had a great time shooting the episode.

“Poor Paul” is an episodic comedy that follows ‘Paul’ and his college-aged roommates as they navigate life, and stars Kevin G. Schmidt, Samantha Droke, Wes Whitworth and Zack Bennett as Paul. The series is produced by Yousef Abu-Taleb, written by Geoff Hoff & Steve Mancini, directed by Sean Michael Beyer and can currently be seen on YouTube, PoorPaul.com and in HiDef on Koldcast.TV.