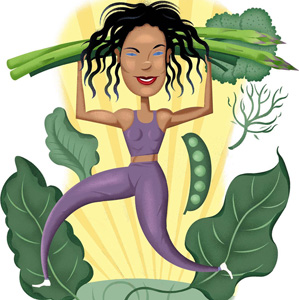 A balanced diet, believe it or not, is a part of mental stability, according to a UCLA study. A balanced diet and exercise can be the right combination to protect yourself from mental disorders and even help the memory, which, of course, is a valuable commodity to students.

Spinach and its fix of folic acid can aid in memory, the omega-3 fatty acids in salmon, walnuts and kiwi fruit can deflect depression and schizophrenia and the spice curcumin has been shown to counteract Alzheimer’s disease and brain trauma.

Fernando Gómez-Pinilla, a UCLA professor of neurosurgery and physiological science who has spent years studying the effects of food, exercise and sleep on the brain, said a change in diet and exercise can “alter our brain health and mental function.” Gómez-Pinilla has also found that junk food and fast food negatively affect the brain’s synapses.

So students, skip the junk and go for the good stuff. It would be nice to be able to remember all you’ve learned in your four-plus years at that costly, but worth it, university.

On Aug. 11, the U.S. Environmental Protection Agency awarded the Los Angeles Conservation Corps $700,000 to train 160 students for green jobs, funded in part through the American Recovery and Reinvestment Act. The L.A. Corps will train and graduate the 160 students with knowledge of the latest environmental technologies and place at least 130 graduates in environmental technician jobs, as well as keep tabs on each student for at least one year.

$700,000 will go to the L.A. Corps for brownfields job training grants to be used to recruit residents from the city’s impoverished Empowerment Zone. Funding includes $500,000 in Recovery Act funding and $200,000 in other EPA brownfields funds.