(Another Record Company)
By Melissa Russell 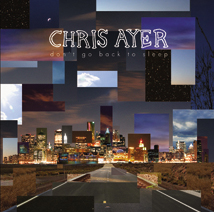 In his major label debut, Don’t Go Back to Sleep, Chris Ayer hits all the right notes. From the first track, Ayer’s sound is reminiscent of Jason Mraz, with beautifully crafted (albeit country-tinged) acoustic guitar strumming, touched here and there with bongos and pianos for support.

Each song on this album has its own unique feel, from piano rock “On Your Way” to gospel influenced “Roy G. Biv” and the slower, melodic closer, “Highway Home.” From track to track, Ayer shows off his vocal talents, from smooth crooning and harmonizing to a harsher rasping moan, each movement is pitch-perfect, and you really get a sense of the emotion behind the lyrics. Speaking of which, the lyrics are both poetic and inspired, but tend to border on the indulgent on some of the slower songs.

In the end, this pop-influenced brand of acoustic country-rock will grab you from the get-go and won’t let you escape until well after the album’s been played through. Twice.

Don’t Go Back to Sleep is currently available.